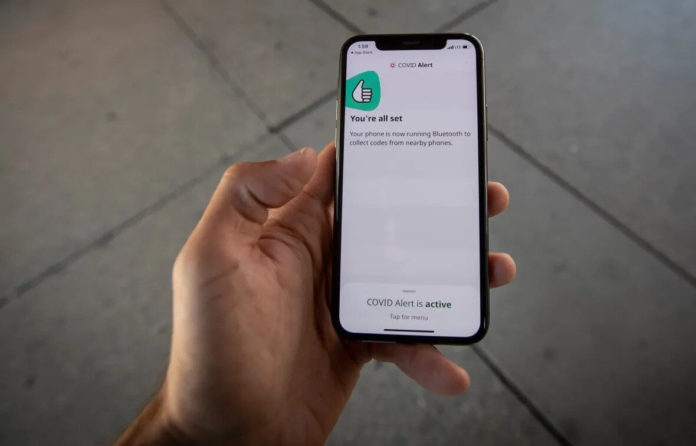 Province has not used the federal COVID Alert app, but the provincial version has been beset by problems
Alberta’s COVID-19 tracing app — which launched in May and has been downloaded more than 260,000 times — has been used in “approximately 20 cases” to track down contacts of someone who tested positive for the disease, the provincial government has revealed.

Ongoing concerns over the app, in a province that has opted out of a similar app offered by the federal government, come as Alberta sets new records for daily cases (more than 1,000 on Saturday), hospitalizations (264 at last count), and deaths (20 more reported Monday).

The province also backtracked, slightly, on earlier claims that problems with the iPhone version of its app were resolved by a recent update. It now admits issues may persist when the software is running in the background on devices made by Apple and says it plans to conduct further testing.

Experts who have studied COVID-19 apps around the world, however, say this problem is endemic to the type of app Alberta is using and can’t be resolved unless Apple changes the way its operating system grants permissions to third-party applications.

They believe it’s unlikely Apple would do that, as the restrictions exist as a battery-saving and security measure that the smartphone manufacturer has deliberately built into its devices.

Apple has also developed its own exposure-notification software, in conjunction with Google, which doesn’t have the same restrictions. The Apple-Google software forms the backbone of the federal government’s COVID Alert app, which has been adopted in all provinces except British Columbia and Alberta.

The Alberta government maintains its app is superior because it provides detailed information directly to the province’s contact-tracing staff, unlike the federal app, which only alerts other users if they have been in close proximity to someone known to have COVID-19.

Many Albertans have questioned the efficacy of the provincial software, known as ABTraceTogether, which has been beset by problems when running on iPhones, in particular.

Initially, the Alberta app needed to be running in the foreground of an iPhone, with the phone unlocked, in order to work. For software meant to constantly scan for nearby devices, some iPhone users complained this made the app nearly useless.

The province said for months it was working on a fix, and Premier Jason Kenney told reporters Nov. 2 the problem had been solved.

“We managed to download a technical solution,” he said. “So now it operates in the back of people’s phones.”

While the update allowed the app to run in the background of devices using Apple’s iOS operating system, a Calgary software developer was still skeptical.

Mathieu Fenniak, a software developer for 20 years, set up a simple experiment with two iPhones running the latest version of ABTraceTogether. He ran the software in both the background and foreground and put the phones within two meters of each other, then examined a database file that contained information about other devices with which the phone had interacted.

He said the experiment had limits, but noted his results were consistent with what others have observed concerning this type of contact-tracing app.

Apple’s restrictions on background functionality of third-party tracing apps have been a frequent subject of discussion among software developers for months.

Even the government of Singapore — which created the original TraceTogether software upon which the Alberta app is based — highlighted the problem two months ago in an article on the TraceTogether web page. It was deemed acceptable because iOS-to-iOS interactions make up a small fraction of total interactions in Singapore, where most people use Android smartphones.

In Alberta, by contrast, the province says two-thirds of ABTraceTogether downloads have been on Apple devices.

Both Alberta Health Services (the health authority that does contact tracing) and non-partisan staff with Alberta Health referred to technical questions about Alberta’s app to the government’s political communications staff.

The government’s answers evolve over time

Health Minister Tyler Shandro’s press secretary, Steve Buick, initially said issues with both the Albertan and Singaporean versions of the app had been resolved.

“The Singapore government clearly states the issue is fixed and the app is working successfully,” Buick wrote in an email, without providing documentation or links.

The Singaporean app has undergone several updates in the past two months but none indicate the iOS-to-iOS problem has been fixed. Brampton News has reached out to the Government Technology Agency of Singapore for additional information but has yet to receive an answer.

Buick’s answers to questions from Brampton News evolved over time.

At first, he said the latest update to Alberta’s app was tested by Deloitte Canada, “who have confirmed it is effective when used in the background and when used iPhone-to-iPhone.”

In response to more specific follow-up questions, he later said: “I think it’s fair to say it’s possible there is some issue with the app; but it’s also fair to suspend judgment because it’s in wide use in the U.K. and Singapore as well as here, and there have been no claims of this kind that we’re aware of.”

Deloitte’s report to the Alberta Government noted the app’s performance was “much improved” on Apple devices after the latest update, but that if the phone was locked and unused for a “long period (typically greater than two hours)” the interval between scans would “start to vary. Also, the app would stop recording encounters altogether “if the application is terminated by iOS.”

Outside experts weigh in

Researchers who spoke with Brampton News say there will always be limited functionality for third-party apps of this nature unless Apple changes its operating system.

“I am not aware of any apps on which this limitation has been resolved,” said Andrew Urbaczewski, an associate professor in business information and analytics at the University of Denver, who has studied the effectiveness of COVID tracing and notification apps in various countries.

Apple recently released a major operating-system upgrade that Urbaczewski said he hasn’t fully analyzed, but he thinks a significant change is unlikely.

He says Apple’s restrictions on third-party apps date back years and are unlikely to change, especially due to Apple and Google’s COVID exposure-notification protocol.

“That’s really the path that you need to take as a developer, to be able to access the Bluetooth radio,” Jackson said of the Google-Apple protocol. “If you’re not using that [protocol], it’s hit-and-miss.”

Jackson said Alberta’s experience with its app reminded him of what happened in Australia, where the government launched a third-party COVID-tracing app and insisted for months it worked on iPhones.

It was later revealed to have only picked up between 25 and 50 percent of attempted interactions between two locked iOS devices, even after the performance was improved.

That degree of functionality is “just not good enough,” Jackson said, and there are not much software updates can do to fix it.

“There’s no update a third-party developer can make that will give them higher-level access permissions into the operating system,” he said. “That’s controlled by Apple and by Google.”

The Alberta government has repeatedly insisted the ABTraceTogether app better suits the province’s needs, however, because the federal app doesn’t send data directly to contact tracers.

Buick said the province is asking its software developers to review the results of the experiment conducted by Fenniak to “to identify if it is accurate or if additional improvements can be made.”