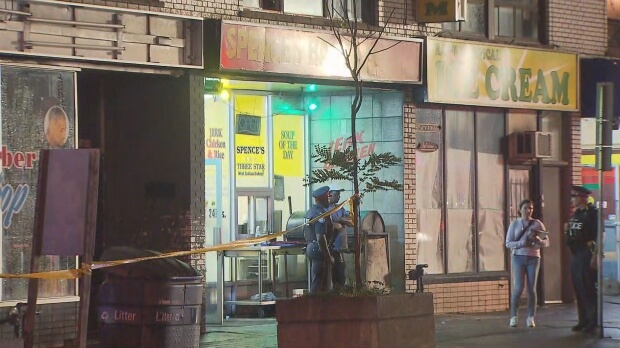 Toronto police have charged three teenagers in a drive-by shooting that injured six people at a bakery in the Oakwood-Vaughan area two months ago.

The shooting took place at Spence’s Bakery on Eglinton Avenue, near Allen Road, on Sept. 2 at around 2 a.m.

According to police, several suspects in a dark SUV drove by the bakery and fired multiple rounds into the business.

Six people, ranging in age from 30 to 69, were injured by the hail of gunfire. They were all transported to hospital, but survived.

Speaking at the time, investigators called the attack “brazen” and said it appeared to be gang-related. They also appealed for anyone with information to come forward.

In a news release Monday, police said they have now charged three suspects in connection with the shooting.

Police said 18-year-old Illia Ayo of London, Ont. is now facing a list of charges, including six counts of aggravated assault and discharging a firearm recklessly.

Two 16-year-old boys, one from Brampton and the other from Toronto, are also facing the same list of charges. However, they cannot be named under the terms of the Youth Criminal Justice Act.

One of the underage suspects made a court appearance in Toronto on Nov. 3, while the other was scheduled to appear in court Monday.

Ayo is scheduled to make a court appearance in Toronto on Nov. 18.