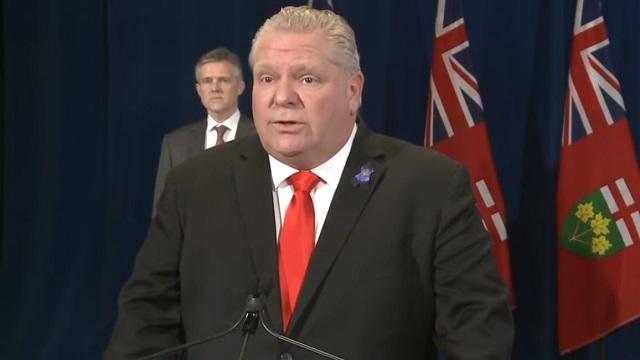 OTTAWA – Residents of the two largest provinces in Canada are expected to learn this week what is the way to force a new look normal like when the government of Ontario and Quebec unveil their initial plans to reopen their locked-down economics.

Sunday sees a warning about raising unrealistic expectations as public health officials across the country reported more than 1,200 new cases COVID-19 and at least 95 additional deaths. Ontario, meanwhile, announced the school will remain closed until the end of May.

There is still a palpable sense of expectation as the Sunday mark a rare day in which the federal and provincial leaders have largely remained out of the spotlight ahead of what may be a significant week for the country.

Ontario Premier Doug Ford plans at the beginning of the week to unveil a framework for reopening the provincial economy, which has been closed since mid-March because of COVID-19. Quebec Premier Francois Legault is also expected to unveil its own time to reopen the province.

Two provinces that have the most COVID-19 cases in Canada, will be the latest to lay out some of the details to reduce their own lockdowns after Saskatchewan, Prince Edward Island and New Brunswick announced a tentative schedule to return to some semblance of normal last week.

But the way it was, in Ontario at least, will not be quick. Ontario Education Minister Stephen Lecce Sunday announced that publicly-funded schools will remain closed until May 31, adding the closure may be extended if recommended by public health officials.

The latest numbers on COVID-19 in Canada

“My commitment can make parents today is to ensure the safety guide our decisions,” said Lecce. “We will never compromise the safety of your child, knowing how important it is to ensure that our children, the most vulnerable in our country, stay safe.”

Ford, who on Saturday condemned the demonstrators outside the Ontario legislature as a “yahoo” because it does not obey the laws of physics-distancing and called for an immediate end to the lock, said that any re-opening will be done gradually to prevent the rise of COVID-19.

Prime Minister Justin Trudeau, who spoke with the prime minister on Friday about their recovery strategy, previously has stressed that there are no plans to rely on people who are immune to arrest COVID-19 twice.

David Fisman, an infectious disease expert at the University of Toronto, said the right approach should be compared using a light dimmer switch not only turns on and off.

“We can not just keep the movie on and off,” said Fisman thread on Twitter on Sunday. “But economically and psychologically, we must find out what we can restart and what we can not.”

Fisman added businesses and services that do not require large meetings can be opened safely if they follow the same rules used by important business.

Parks and green spaces could also be opened to access, he said.

The federal opposition parties together looked towards the future on Sunday.

During a press conference in Ottawa, the Conservative finance critic Pierre Poilievre demanded that the government obtain enough protective equipment to help the province re-opened their economies.

But even as he underscored the need for the Canadian economy to finally return to the “production-fueled investment rather than debt-fueled consumption,” Poilievre ask Ottawa to make ensure the uninterrupted business of federal support if they reopen partially, but not completely.

“If a business is open in Saskatchewan, but the Canadian government to tell them that they can not open and begin to draw an income or they will lose their rent subsidies, many businesses will be effectively banned for not finance public health reasons from forward and work.”

Federal New Democrats, meanwhile, launched an effort to identify areas where the economy should be changed after COVID-19. The party said the process will include consultation with experts such as businessman Jim Balsillie and former parliamentary budget officer Kevin Page.

The hope of the party was to increase its influence in the current minority Parliament and some of the harsh realities of the current crisis to promote certain economic and social reforms.

“What really becomes clear is that we will need a plan to restore the economy and to move toward a new normal,” said NDP MP Charlie Angus, who led the task force.

“One of the fundamental reality to get out of this crisis is that the market will not only bring in. It would require massive public investment. … So that requires a conversation about what kind of public investment and who will benefit?”