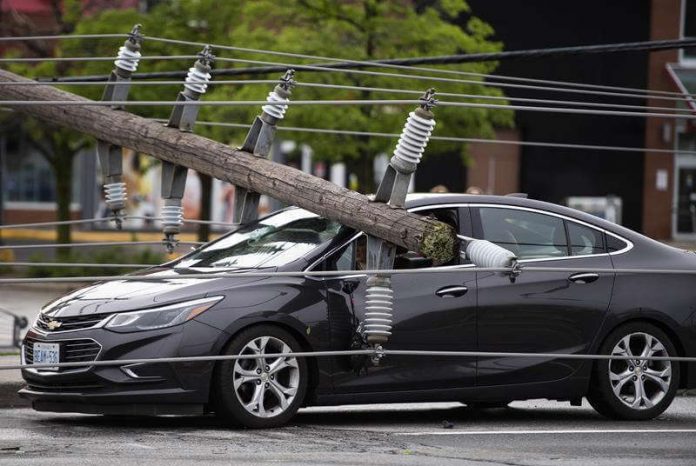 Emergency crews rushed to restore power and clear roads on Sunday a day after a deadly and destructive storm swept across southern Ontario and Quebec, though officials cautioned that some of the outages could take days to resolve.

The true human toll of Saturday’s storm is still unclear, but police in Ontario reported seven people killed by falling trees in locations across the province during the storm Saturday, and an eighth killed by a falling tree branch in the storm’s aftermath on Sunday.

Police reports on the various deaths suggest victims were doing everything from camping to playing golf to taking weekend strolls when they were killed.

A ninth person died Saturday when the boat she was in capsized on the Ottawa River near Masson-Angers, Que.

The storm tore through southern Ontario and Quebec in a matter of hours, breaking hydro poles and toppling towers, uprooting trees, and ripping shingles and siding off houses.

Several people reported their backyard trampolines were tossed around like feathers, taking out fences like dominoes and landing many houses away. Others are facing extensive home repairs as trees crash through roofs and windows.

Environment and Climate Change Canada meteorologist Gerald Cheng said the storm measured winds up to 132 kilometers an hour, marking the first time a thunderstorm was severe enough to trigger an emergency alert broadcast.

Cheng said the storm itself looks to have been what is called a derecho.

How can Canada avoid major immigration backlogs in the future?

“When they say derecho, it’s widespread, long-lived wind storms that are associated with rapidly moving thunderstorms, and that seems to be what we had yesterday,” he said. “Because when you look at the damage, that was widespread, it wasn’t just one track.”

Ottawa Mayor Jim Watson said at a news conference late Sunday afternoon that the storm’s impact is affecting every corner of his city.

“Yesterday’s storm was fast and violent,” he said. “It ravaged really the entire city.”

And while he sympathized with residents struggling to cope without power, he warned they may not see it restored for three or four more days.

“This has been a very, very difficult 24-hour period,” he said. “We don’t have clear sight as to when everyone will get their power back.”

Watson said the city didn’t need to declare a state of emergency because that mainly allows it to override procurement processes and that’s not necessary right now.

But widespread damage did compel the Ontario towns of Uxbridge, north of Toronto, and Clarence-Rockland, east of Ottawa, to declare states of emergency.

Uxbridge Mayor Dave Barton said the downtown core sustained significant damage, including to several residential buildings and a brewery. But he said power outages and downed phone lines are causing the most distress.

Internet networks and cellular services were down in many locations.

The damage to the power grid is extensive and complicated, hydro utilities reported Sunday.

Hydro One said in a news release late Sunday that crews had restored power to 360,000 customers, but 226,000 were still without electricity.

It said that in the Ottawa area, its crews were building a temporary bypass after four transmission towers were toppled by the storm.

Joseph Muglia, director of system operations and grid automation at Hydro Ottawa, said only about 5,000 customers had their power restored Sunday, leaving more than 170,000 still in the dark.

He said more than 200 hydro poles were damaged beyond repair, many snapped in half by the force of the winds. A truck was loaded with replacement poles Sunday and was on its way to the city, but he warned the repairs are complicated and the utility hasn’t finished assessing the situation yet.

It has been less than four years since this many customers lost power in Ottawa, but the tornadoes in that September 2018 storm caused more localized damage. The tornadoes led to about 200 unique outages and most were fixed within 36 hours. On Sunday Hydro Ottawa was still dealing with more than 550 unique outages.

Power to the city’s water treatment plant was restored late Sunday afternoon, one of the priority repairs for Hydro Ottawa. Muglia said the Ottawa airport should be back on grid power before the end of the day.

The City of Ottawa has opened nine respite sites at community centers and areas for people to charge their devices, take showers and, in some cases, access some food. The Salvation Army and Canadian Red Cross are aiding at many of the sites.

Across the provincial border, Hydro-Québec said the storm cut power to 550,000 customers from Gatineau to Québec City at its peak, while as of Sunday afternoon there were close to 350,000 customers still cut off.

Sophie Desjardins, who lives in Lachute, northwest of Montreal, posted a photo of what was left of her truck after a tree crashed on the vehicle while she was driving back home with her boyfriend.

“The sky turned so dark, and the wind was so intense,” Desjardins said on Sunday.

“We felt a huge impact and the window shattered … When we saw the condition of the truck, we realized we had gotten pretty really lucky. If the tree had fallen two seconds earlier, it would have fallen directly on us … The furniture that was in the back of the truck was completely destroyed.”

David Sills, executive director of the Northern Tornadoes Project at Western University, said wind speeds could have reached much higher than already reported, given the concentrated damage.

“We’re seeing evidence of some damage, such as roofs off and hydro towers crumbled, that kind of thing that gets more into … 180 to 220 kilometres per hour,” he said.

He said teams from the project have gone to the Uxbridge area as well as to southern Ottawa over suspicions that they could have been hit by tornadoes or elevated winds.

The last derecho storm to hit the region with such strong wind speeds was back in 1995, said Sills.

“This is a fairly rare event in Canada where it’s just widespread wind damage over a long, long track and reaching wind speeds that are quite high.”

This report by The Canadian Press was first published on May 22, 2022.

— With files from Virginie Ann in Montreal.