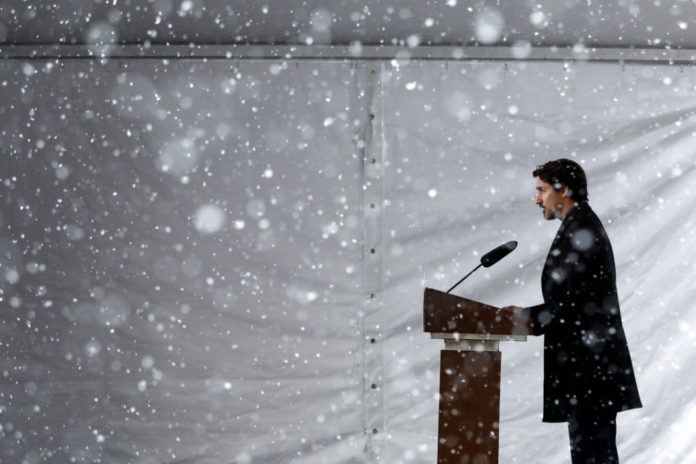 OTTAWA – As Canadians become head of a long weekend getaway unlike in living memory, Prime Minister Justin Trudeau offered new insights into what the long-term reality for life could look like push-containing and eventually cure COVID-19 continues.

Rounding out the 26-day address in a row for Canada from outside Rideau Cottage, Trudeau said that Canada is currently in the early stages of “unchecked” of the virus’ spread. However, he added, if the Canadian stay at home as much as possible, be alert to maintain their physical distance, and wash their hands, “this will be the first and worst phase that we went through as a country.”

After going through the first wave – which could end this summer when the public health measures are strictly maintained – Canada can not and will not return to normal pre-pandemic, he warned.

“Normal” will only happen once a vaccine is discovered for the novel coronavirus.

We are humbled by this virus and we are learning every single day,” said Chief Public Health Officer Dr. Theresa Tam on Friday during the daily federal update.

Trudeau said to expect that, once some rules can be loosened, certain sectors will be allowed to go back to work, but there will be limits on how people can interact with each other in society, travel restrictions, and a constant need for monitoring for possible resurgences.

The prime minister said talks are already underway with industry, health officials, and the provinces and territories about who could be allowed to return to work, and when, but it will be gradual.

“That is the reality, but the fundamental bottom line that people can reflect on this weekend is, if we stay strong in our social distancing measures, now and for the coming weeks, we can see how things can start getting back to normal in the coming months,” Trudeau said.

Trudeau said that by the time Canada is out of the first phase, there will be better testing protocols and technologies to track the virus as well as people who are infected.

As for how long it could take before there is a vaccine, the prime minister said that while research is underway in Canada and across the world, “it could take as little as six months, more likely it will take a year or a year and a half, maybe even longer.”

On Thursday, Health Canada released national projections that showed, under the current public health measures, up to 44,000 Canadians could die from COVID-19 in the months ahead, prompting Trudeau to caution that the country is in for months of “continued, determined effort.”

The federal projections detailed the overall best- and worst-case scenarios for the pandemic’s spread and impact in Canada, varying on the degree of actions taken by governments and Canadians.

Under all scenarios, the peak appears to be coming sometime between late spring and early fall.

The scenarios indicate that, depending on the containment efforts, between 4,000 and 300,000 people in Canada could die from COVID-19 over the course of the pandemic. Though the current reality of the virus has Canada closer to the lower end of that spectrum and the two more developed scenarios from Health Canada under the current strong measures show that the range is likely somewhere between 11,000 and 22,000 Canadian deaths.

If that grows further to 10 percent of the population, approximately 44,000 people in Canada could die.

With no control efforts in place, up to 80 percent of Canadians could contract the virus. That scenario could result in more than 300,000 deaths, which is approximately equivalent to the total number of deaths from all causes in Canada each year.