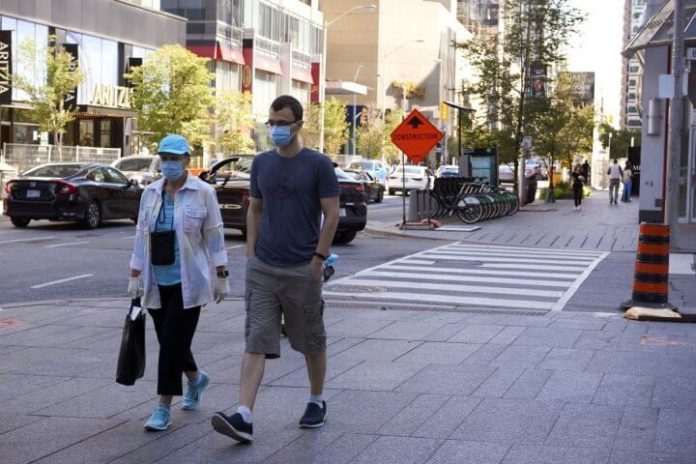 Health officials in Canada reported 247 new novel coronavirus infections on Labour Day Monday, pushing the country’s total case count to 132,053.
Health authorities also said one more person had died after contracting the respiratory illness, bringing Canada’s total death toll to 9,146. However, a number of provinces and territories did not report new COVID-19 data on Monday due to the holiday.
In Quebec — the province hardest-hit by the virus — 216 new cases of COVID-19 were reported, and health officials said one more person had died, bringing the province’s total death toll to 5,770.

So far, health authorities in Quebec have administered 1,721,867 tests, and 55,871 have recovered after contracting COVID-19.

Ontario health officials did not release any new data on the holiday Monday, but 158 new cases reported on Sunday brought the province’s case count to 43,161.

Since the pandemic began, 38,958 have recovered after falling ill.
Manitoba saw 15 new infections on Monday, bringing the provincial total to 1,338.
So far, 146,064 tests for the virus have been administered in Manitoba, and 910 have recovered.

In Saskatchewan, 11 new COVID-19 cases were reported, but health officials said no more deaths had occurred.

Nova Scotia added one new case of the virus on Monday, but the province’s death toll remained at 65.
More than 81,300 tests have been conducted in Nova Scotia and 1,017 have recovered from infections.

Neither New Brunswick nor Newfoundland and Labrador reported a new case of the novel coronavirus, and health officials in each province said no additional deaths had occurred.

In New Brunswick, 64,188 tests have been administered, and 187 people have recovered after becoming infected with the virus.

Meanwhile, Newfoundland and Labrador health officials have tested 33,483 people for the virus. 265 of the province’s cases are considered to be resolved.

Forty-four people have recovered after contracting the virus in PEI.

Neither British Columbia nor Alberta released any new COVID-19 data on Monday.

But the latest data released in British Columbia on Friday said the province has seen 6,077 cases of the virus since the pandemic began and 211 deaths.

Officials in British Columbia have conducted more than 386,100 tests and 4,706 cases are considered to be recovered.

In Alberta, numbers released Friday said the province has seen 4,474 cases of the virus so far.

There have also been 242 deaths related to COVID-19 in the province.

In a statement on Monday, Canada’s chief public health officer Dr. Theresa Tam said the slow but steady increase in COVID-19 cases is cause for concern.

Tam said the average daily number of people testing positive over the last week is 545 — a 25 per cent increase over the previous week which saw a daily average of 435, and 390 a week before that.

That number increased every day over the last week prompting Tam to remind Canadians not to get complacent about their risk of contracting the novel coronavirus.

None of the territories released new COVID-19 data on the holiday Monday.

But according to the latest numbers released on Friday, all five of the confirmed COVID-19 cases in the Northwest Territories were considered to be resolved.

The territory has conducted 4,012 tests for the virus.

In Yukon, all 15 of the cases of the virus previously detected have been resolved.

More than 2,700 people in the territory have been tested for the virus.

Nunavut has not yet confirmed a single case of COVID-19.

The number of novel coronavirus cases has now topped 27 million, according to a tally from John’s Hopkins University.

The United States remained the epicenter of the pandemic on Monday with more than 6.2 million cases.

— With files from The Canadian Press