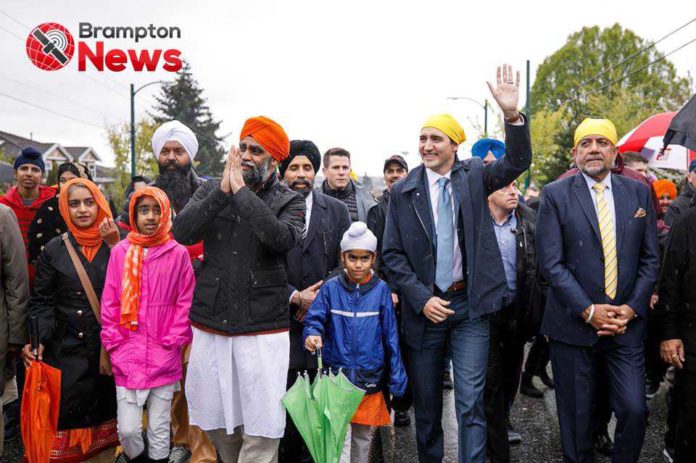 This year’s Vaisakhi celebration was rainier than the norm. And that, combined with the exodus of Indian businesses to Surrey, resulted in a smaller crowd than in past years along Marine Drive and up Main Street.

But things were hopping by the time the various northbound floats on Main Street passed East 53rd Avenue.

As usual, there were tons of politicians in the morning at the Ross Street Temple, which is operated by the Khalsa Diwan Society. It’s the organization that oversees the parade.

Here’s the collection of tweets on Vancouver Vaisakhi

You can see a group shot of many of the New Democrats in this tweet from MLA Janet Routledge.

Justin Trudeau was also on the scene, as captured in the video below by Straight contributor Gurpreet Singh.

Trudeau’s visit came after Public Safety Minister Ralph Goodale announced that there won’t be a reference to “Sikh extremism” in future reports on terrorism—a topic that Singh has written about in the past.

I ran into several politicians on the plaza outside the temple, including Conservative Leader Andrew Scheer.

He said that he is trying to create a “big-tent party…that every Canadian can see themselves reflected in.”‘

Today, we gathered together at @kdsross in #VanSouth, where I grew up and the riding I'm proud to represent, to celebrate the founding of the Khalsa and recognize the rich history and contributions of Sikh Canadians. Thanks to @JustinTrudeau for joining us! #Vaisakhi2019 pic.twitter.com/EBfVlOCC42

Vaisakhi is a time to focus on what matters – family, friends, and coming together as neighbours & fellow Canadians – and an opportunity to recognize the remarkable contributions Sikh Canadians have made to our country. What a celebration in Vancouver today! pic.twitter.com/Hlq6d24SJo