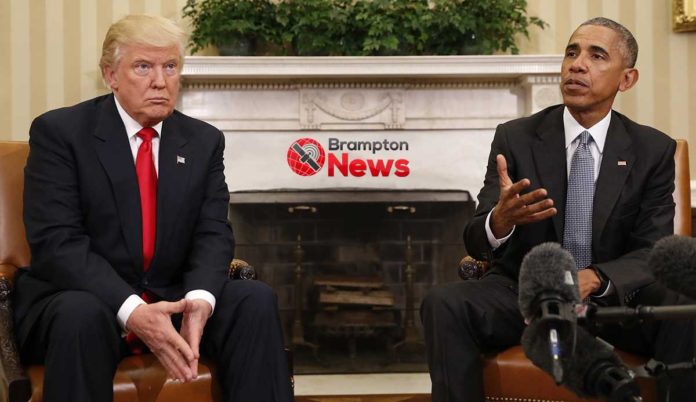 When questioned by interviewers about migrant children detained at the southern border, President Donald Trump has attempted to guide the fault toward the past organization, saying previous President Barack Obama started the strategy of separating those kids from their parental figures, despite the fact that reality checkers have reliably observed that claim to be false.

During an interview on NBC’s “Meet the Press,” which aired Sunday, Trump told host Chuck Todd that he “inherited separation from President Obama” and that “I was the one that ended it.”

“When I moved toward becoming president, President Obama had a partition arrangement. I didn’t have it. He had it. I united the families. I’m the one that assembled them,” he told Telemundo’s José Díaz Balart in a meeting that broadcast Thursday.

What’s more, on Thursday he read a Time magazine that “I inherited separation” and “I’m the one that put the families back together.”

Be that as it may, as per FactCheck.org, “past organizations did not have a sweeping strategy to arraign guardians and separate them from their kids.” It was after the Trump organization declared its “zero-resilience” movement approach in April 2018, in which everybody who wrongfully entered the U.S. was alluded for criminal indictment, that a great many transient youngsters were separated from their folks.

“We would prefer not to separate families, yet we don’t need families to go to the outskirt illicitly and endeavor to go into this nation inappropriately,” said then-Attorney General Jeff Sessions when the strategy was declared. “The guardians are liable to arraignment while youngsters may not be. Along these lines, in the event that we carry out our responsibility and arraign those cases, at that point youngsters definitely for a timeframe may be in various conditions.”

In a May 2018 interview, then-White House Chief of Staff John Kelly told NPR a “big name of the game is deterrence” in stopping illegal immigration, and that family separations “would be a tough deterrent.”

.@realDonaldTrump once again claimed that @BarackObama had a family separation policy. "I didn’t have it," Trump said. "He had it." That's False. https://t.co/swHABwuvXO https://t.co/bEMvllgsgL

Migrant apprehensions and extraditions during Obama’s presidency outpaced those of Trump’s first years as indicated by Department of Homeland Security data and a report distributed Friday by Axios. In any case, PolitiFact found that family partitions were rare during the Obama and Bush administrations and became “systematic” under Trump’s zero-tolerance policy.

In 2014, there was a surge in the number of migrant children arriving at the border. By far most were unaccompanied, and thousands were confined in alternative detainment focuses that included overcrowded chain-link fence cages where they were forced to sleep on the floor with space blankets.

The Obama administration sought to keep families together in detention, but a court ruling held that those children could not be held more than 20 days. So, officials began to release entire families, except in cases where custody could not be established or the parent was being prosecuted for another crime, such as drug smuggling, according to PolitiFact.