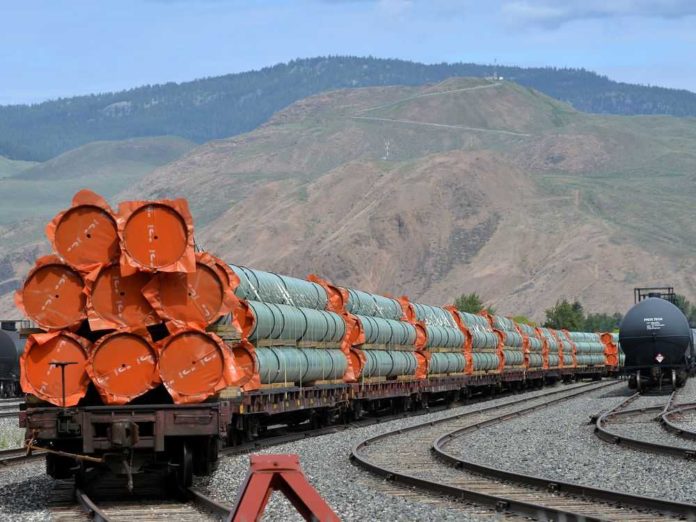 Pardon me if I don’t get up and kiss Trudeau’s butt.

To be reasonable, the approval for the Trans Mountain Pipeline Expansion, a pipeline Canadian taxpayers now own because the former owners wouldn’t deal with all the BS and bailed, is better than a kick in the ass with a frozen boot.

Yet, we face a lot a bigger number of inquiries than answers Tuesday.

Of course, the news hits the streets from the comfortable cover of the country’s capital, far from those in Alberta who’ve been cheated and are persuaded there’s an awesome shot they’ll be screwed once more.

The pipeline expansion green light is reported in the safe limits of Ottawa where Alberta is just first when they look in the map book of Canadian regions and a great part of the press sounds miserable the executive even made this step.

Trudeau didn’t have to take the tough questions from Alberta newshounds.

That is significant. Keep in mind Trudeau wasn’t compelled to attempt to stroll back his remarks about eliminating the oilsands until he came here.

Likewise the time a specific scribbler asked Trudeau whether he’d give a go to the Energy East pipeline if the National Energy Board was on board. Happened here.

In the capital, Ottawa’s government officials speak the nuts and bolts of Tuesday’s choice however quite a bit of what is said is exceptionally difficult to hear on telephone lines saved for those of us in the outback and Team Trudeau does not give any sound.

Some keen person is discussing the course of the pipeline and it sounds like the course is available to change yet you must be in Ottawa to make out the words.

Back in Alberta, the words are boisterous and clear. Chief Kenney says this day isn’t a triumph to celebrate, simply one more advance en route. He isn’t high-fiving as Rachel Notley and her NDP pals did.

Achievement is estimated by scoops in the ground and, all the more critically, scoops that stay in the ground until the pipeline crosses the end goal, at whatever point that is.

The federal government must guarantee the standard of law wins. Kenney says he raised the issue with Trudeau via telephone Tuesday evening.

Kenney advises to the “small minority who are focused on infringing upon the law to hinder our monetary advancement.”

The head says it comes down to whether Canada is a majority rule government or “a nation that hands to a bunch of remote financed extraordinary interests the capacity to hinder our monetary advancement.”

Kenney exhorts we should be cheerful and, in the event that one thing is valid, Albertans are confident regardless of how regularly and how hard they get punched in the face.

NDP pioneer Notley encourages Kenney not to jab pipeline adversaries but rather the head isn’t taking guidance from “the counter pipeline party” who made an exemption for Trans Mountain.

All things considered, the NDP needed to back this pipeline. It’s the Alberta chief’s activity.

Shannon Stubbs, the sketchy Alberta MP strolling point on pipelines for the governing Conservatives, gets the chance to see Trudeau all the time in Ottawa.

“It won’t be smooth cruising on the grounds that every one of those restricted to the pipeline before as yet contradicted to it. Also, they will do all that they can to attempt to stop it once more.”

What’s Trudeau’s arrangement? He doesn’t have one.

Truly, don’t check your pipeline chickens before they’re brought forth.

This is Trudeau who will force a carbon charge on Alberta if he’s re-chose.

This is Trudeau who pushes laws hindering different pipelines.

This is Trudeau who chides premiers for setting out to specify how his activities hurt the solidarity of the nation.

At that point, there are those dissidents.

A boss in B.C. says Tuesday’s news is “something of a non-occasion” since development won’t begin soon.

Trans Mountain discusses the means required before getting its scoops in the ground and the oil patch doesn’t structure in champagne for the event.

Moody’s, the big deal rating organization, wholes up the scene with the extravagant jeans talk normally among the corporate group.

The pipeline expansion faces many challenges and Moody’s sees “a tremendous amount of execution risk until the oil starts flowing.”

A tremendous amount of execution risk.

In other words, hang on to your hats, this ride is just beginning and it could be rough.