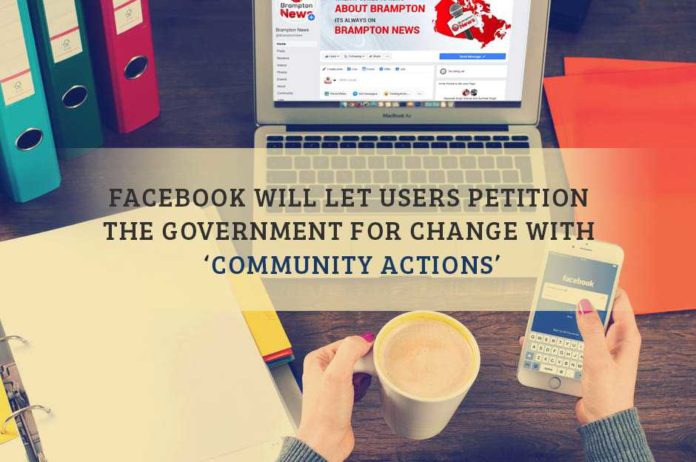 Supporters for some given request will be able to discuss the subject with individual supporters, creating events and fundraisers. Facebook is set to dispatch a petitions highlight called “Community Actions” that will give clients a chance to ask for change from their local and national elected officials and government agencies.

As indicated by a report by TechCrunch, “Community Actions” will be an appeal to highlight in Facebook’s News Feed and achieve clients in the US on Tuesday and different markets later.

“Clients can include a title, depiction, and picture to their ‘Community Action’, and tag relevant government agencies and authorities who’ll be told,” the report included.

Supporters for some random request will have the capacity to examine the subject with fellow supporters, creating events and fundraisers.

Be that as it may, the “Community Actions” highlight could likewise give “vocal interest groups a bully pulpit from which to pressure politicians and bureaucrats with their fringe agendas”.

As per a Facebook representative, “Community Action” is another path for individuals to advocate for changes in their networks and join forces with elected authorities and government agencies on solutions.

Since bad actors can misuse such highlights, Facebook will use “a combination of client hailing, proactive algorithmic identification, and human enforcers,” to defend the “Community Action” include from falling into wrong hands.

“There are some limits already: users can’t tag President Donald Trump or Vice President Mike Pence,” said another report in The Verge.