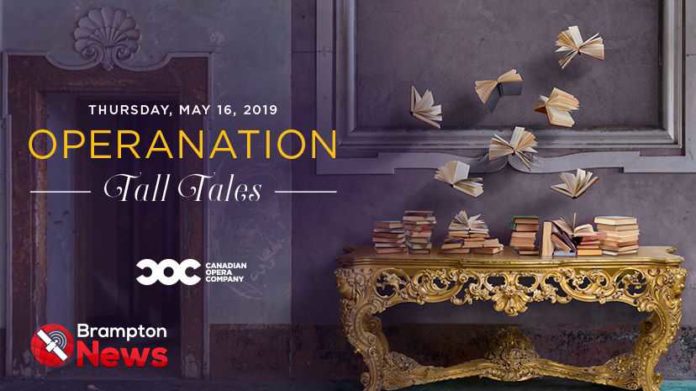 OPERANATION: TALL TALES IS THE MOST WHIMSICAL PARTY OF THE SEASON

The Canadian Opera Company (COC) has just revealed additional programming details for this spring’s Operanation: Tall Tales on May 16, 2019. Celebrating its milestone 15th birthday, Operanation is a highlight of the spring social season, bringing the best of party and performance under one roof. It is the perfect event for art enthusiasts and opera-curious.
This year features musical guest Joseph of Mercury. The Toronto singer, songwriter, and producer is best known for his hit “Find You Inside,” which was featured on Elton John’s Beats1 program Rocket Hour, and co-writing Majid Jordan’s “Something About You.” In addition to performing some of his biggest hits, expect a genre-bending collaboration with the creative young singers of the COC Ensemble Studio.

The dynamic party also features performances from DJ Chippy Nonstop and Karim Olen Ash. DJ Chippy Nonstop is an audacious, undeniable party starter who brings her unique energy to every stop she makes around the globe. Karim Olen Ash is a staple DJ in Toronto’s fashion industry who focuses on music that makes you move regardless of the style or genre.

Hosted by Danika Lorèn, soprano and COC Ensemble Studio graduate, Operanation will transform the iconic Four Seasons Centre for the Performing Arts, overlooking Queen Street West, into a fairytale fantasy, complete with a moody purple floral installation from Pink Twig evoking a secret garden. Guests will experience culinary innovations provided by The Chase Hospitality Group. The menu will include pops of purple, whimsical and woodland elements, and towers of choux. Guests will also enjoy signature cocktails courtesy of Spirit of York Distillery Co., and an exclusive non-alcoholic placebo cocktail from Rosalinda Restaurant in partnership with Seedlip.

Glaciers shrinking much faster than experts had gauged

New this year, the COC has also partnered with iconic retail brand The Fitzroy, Canada’s go-to space for glamorous outfit rentals. The Fitzroy has hundreds of looks to choose from to fulfill every sartorial fantasy. In a special promotion, on April 13 from 6:00 – 8:00 p.m., Operanation ticket-buyers will receive 20% OFF any Operanation rental while enjoying party tunes, refreshments, and professional styling advice from The Fitzroy’s experienced staff.

VIP Dinner tickets are SOLD OUT. Party tickets are $150 and include open bar, delectable eats, live music, and a fun evening out with arts enthusiasts. Tickets are available online or by calling COC Ticket Services at 416-363-8231.

The COC Academy is underwritten by The Catherine and Maxwell Meighen Foundation, with additional support by Keith Ambachtsheer & Virginia Atkin.

Operanation is the Canadian Opera Company’s premier fundraising event. For arts patrons as well as the opera-curious, Operanation presents a unique experience, equal parts party, and performance, with special collaborations between classic and modern music and complementary art forms ranging from visual arts to fashion. Attracting over 1,000 guests, Operanation takes over three floors of the COC’s opera house, the Four Seasons Centre for the Performing Arts. Funds raised for Operanation are directed towards the COC’s Ensemble Studio, Canada’s premier training program for young opera professionals. For more information on Operanation, visit operanation.ca.

Based in Toronto, the Canadian Opera Company is the largest producer of opera in Canada and one of the largest in North America. The COC enjoys a loyal audience support-base and one of the highest attendance and subscription rates in North America. Under its leadership team of General Director Alexander Neef and Music Director Johannes Debus, the COC is increasingly capturing the opera world’s attention. The COC maintains its international reputation for artistic excellence and creative innovation by creating new productions within its diverse repertoire, collaborating with leading opera companies and festivals, and attracting the world’s foremost Canadian and international artists. The COC performs in its own opera house, the Four Seasons Centre for the Performing Arts, hailed internationally as one of the finest in the world. Designed by Diamond Schmitt Architects, the Four Seasons Centre opened in 2006. For more information on the COC, visit coc.ca.