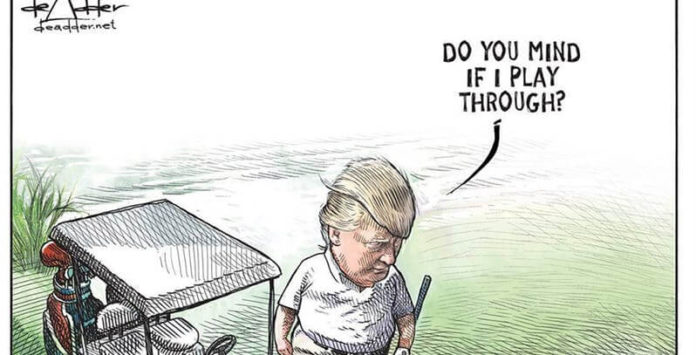 Canadian cartoonist Michael de Adder has been given up from Brunswick News Inc. after a cartoon of President Donald Trump went viral.

De Adder uncovered on Twitter he’d been “let go from all [the] papers in New Brunswick.” As de Adder was under contract, he explained he was not “in fact” terminated. The choice was allegedly not expressly connected to the animation, however, occurred just a brief span after it became a web sensation. De Adder went on to say he just finished a book releasing in September, so the incident is “a setback not a deathblow.”

Be that as it may, de Adder added, “The hardest part in the majority of this, I have a mother with dementia [sic] in NB who experiences considerable difficulties recollecting her family on occasion. In any case, she realizes her child draws kid’s shows. Some portion of her day by day schedule is to open the @TimesTranscript and see her child’s animation. An animation that won’t be there any longer.”

Star Wars actor Mark Hamill, who has been openly critical of President Trump, responded to the cartoon, writing “Pulitzer Prize-worthy.”

Cartoonist Michael DeAdder was just fired from the newspaper for this cartoon. pic.twitter.com/PhpkH5FbcO

The cartoon itself is inspired by the now infamous image of Oscar Alberto Martinez Ramirez and his 23-month-old daughter Valeria, who died attempting to cross into the United States from Mexico after leaving El Salvador.

Association of Canadian Cartoonists President Wes Tyrell responded to de Adder’s firing on Facebook. “Cartoonist Michael de Adder was let go from his job drawing editorial cartoons for all the major New Brunswick newspapers 24 hours after his Donald Trump cartoon went viral on social media, a job he held for 17 years,” he wrote. “Although he has stated there was no reason given for his firing, the timing was no coincidence.”

Tyrell noted J.D. Irving, Limited, which owns Brunswick News, had a “series of taboo subjects [de Adder] could not touch. One of these taboo subjects was Donald Trump.”