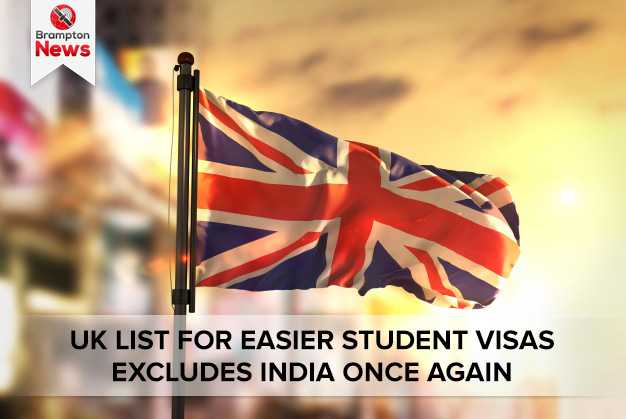 Countries included in the list are assessed against a range of criteria, including the likelihood of their students abusing the visa system and overstaying. The Theresa May government has often mentioned links with India as a key focus in the post-Brexit United Kingdom, but the revised Home Office list of countries whose students are allowed easier UK visa norms excludes India again.

Countries included in the list are assessed against a range of criteria, including the likelihood of their students abusing the visa system and overstaying. India does not yet meet the criteria, but may do so in future, officials say.

The new countries included in the revised list of 26 countries (Appendix H) are mentioned in the latest changes to immigration rules submitted to parliament: Brazil, Kazakhstan, Mauritius, Oman, Peru, and Tunisia.

Karan Bilimoria, the member of the House of Lords and president of the UK Council for International Student Affairs, said: “This adds insult to injury. India is soon to overtake the UK as the fifth largest economy in the world and the growth in Indian students studying abroad is only going to increase over the coming years”.

“By discriminating against India in this way for the second time, it is Britain that will lose out on Indian students who are the some of the brightest in the world. And as for the UK talking about future post-Brexit free trade deals with India – with this type of behavior, Britain can dream on”.

Students of countries in the list are allowed to provide a reduced level of documentation while applying for a visa to study at UK higher education institutions.

The revised list is part of the new immigration changes that include two new visa routes to set up businesses in the UK; the new routes replace the current Tier 1 (Graduate Entrepreneur) and the Tier 1 (Entrepreneur). Most of the changes take effect from March 29, the date the UK is due to leave the European Union.

The new ‘Start-up visa’ will be open to those starting a business for the first time in the UK, while the ‘Innovator visa’ will be for more experienced business people who have funds to invest in their business.

The changes also tighten norms for the controversial Tier 1 (Investor) visa, which has been used by over 75 Indian millionaires since it was introduced in 2010. There have been concerns of foreign millionaires laundering money through this visa route.

Some Interesting Plans Coming for this Brampton Neighborhood

The Home Office said the reformed route will better protect the UK from illegally obtained funds: “Applicants will be required to prove that they have had control of the required £2 million for at least two years, rather than 90 days, or provide evidence of the source of those funds”.

The May government last week announced plans to increase the post-study work period and making it easier for Indian and non-EU students to find work in a bid to drive education-related growth after Brexit from £20 billion to £35 billion per year by 2030.