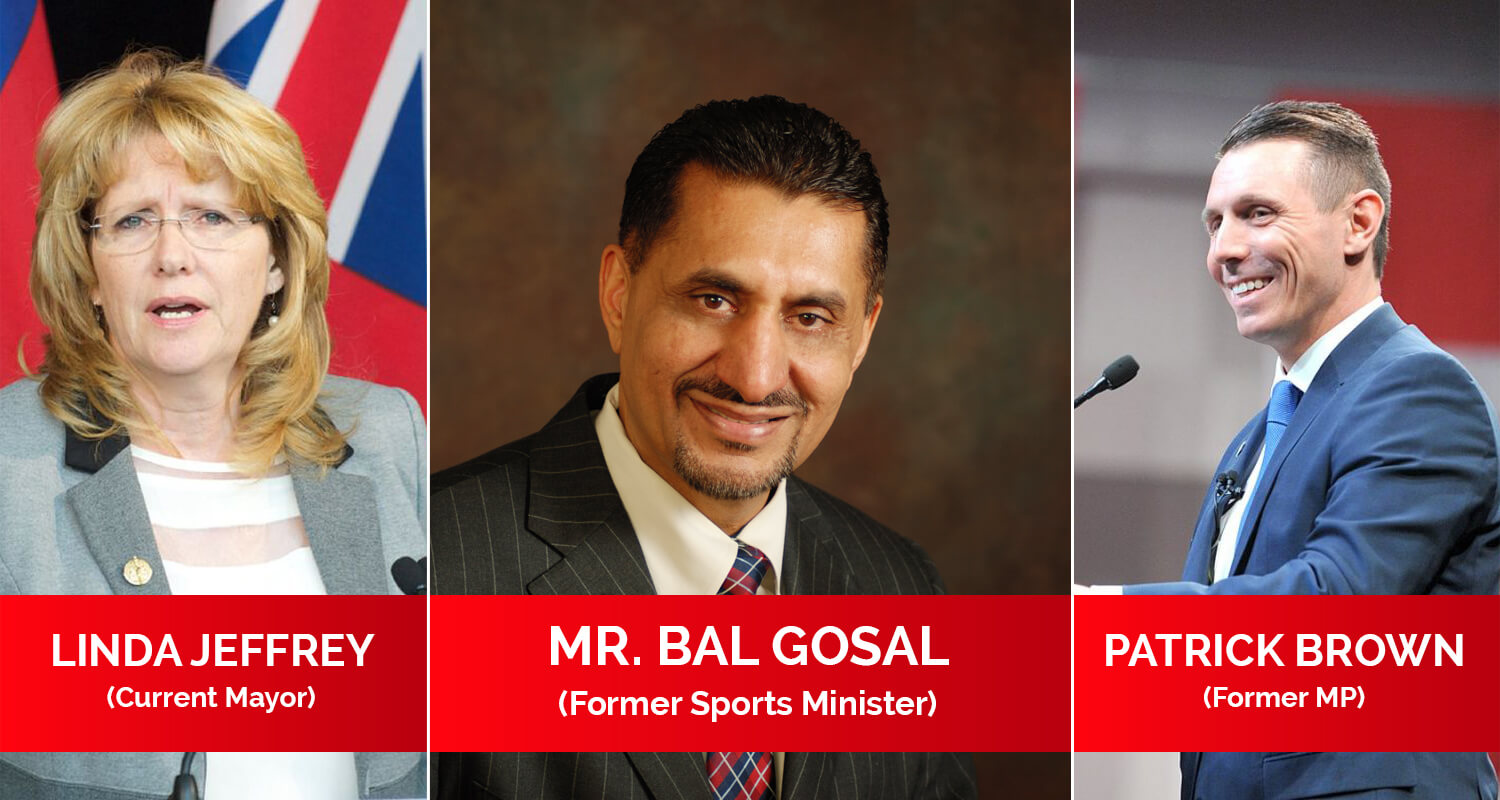 Municipal elections in Brampton are two weeks away and campaigns for Mayor, trustees
and councilors are in full swing. For the position of Mayor, former Ontario PC Party leader
Patrick Brown is up against incumbent Linda Jeffrey and former federal Cabinet Minister Baljit (Bal) Gosal. These are the three candidates, out of a total of seven, that made a strong impression during the debates. Any one of these three Mayoral candidates can win this election on October 22nd . The remaining candidates have lots of passion for Brampton and plenty of good ideas on how to improve the city. However, they lack the leadership skills or experience necessary to do the job well. Bal Gosal is a former MP and Sports Minister of Canada. Under his leadership, Canada hosted the most successful Pan-Am games in recent history. He has been an upstanding member of the Brampton community for over three decades. Bal has demonstrated the leadership skills crucial to the successful growth of Brampton over the next decade. In his role as Sports Minister, Bal traveled around the world and made connections with foreign political and business leaders.
His national and international experience will be used to make Brampton a hub of business and education. Bal has promised to unite the council and work closely with the province to provide Brampton with everything it needs to succeed. Linda Jeffrey was a Liberal MPP for Brampton Centre and Brampton – Springdale from 2003 to 2014. She became the Mayor in 2014. Linda had trouble getting anything done in her first term as Mayor. Major issues such as crime and transit have gotten much worse in the past four years. She got the town talking about LRT but failed to get consensus to complete the project. Public perception is that the lack of action is due to her failure to unite the council. In spite of this dysfunction, Linda brought a Ryerson University satellite campus to the city, which will bring around 1500 students to Brampton. Linda has promised to do better in her second term and to start working on the problems that she has been ignoring for the past four years. Patrick Brown is a former MP and Leader of Ontario PCs. After being forced to step down as PC Party leader, he decided to run for Peel Regional Chair. That ended when the Ontario government decided to cancel the election for regional chairs in Peel and three other jurisdictions. He then decided, as a last resort, to run for Mayor of Brampton. Patrick has promised to do build a muli-purpose stadium without any plans or means of doing so.

Brampton Mayor Elections: Other Candidates in the Race

John Sprovieri had a great 30-year career in politics as councilor of Wards 9 and 10 in
Brampton. While he isn’t favoured to win, nobody in Brampton will forget his name quickly.
The lawyer, Wesley Jackson, is fiercely passionate about improving Brampton. His platform is a little unrefined, but he will be a strong contender in Brampton’s next election if he decides to run again. Mansoor Ameersulthan and Vinod Kumar don’t have a strong presence but add depth to the debate panels that they appear on.

There are plenty of choices for Brampton voters on October 22nd – think carefully and make sure to go vote.