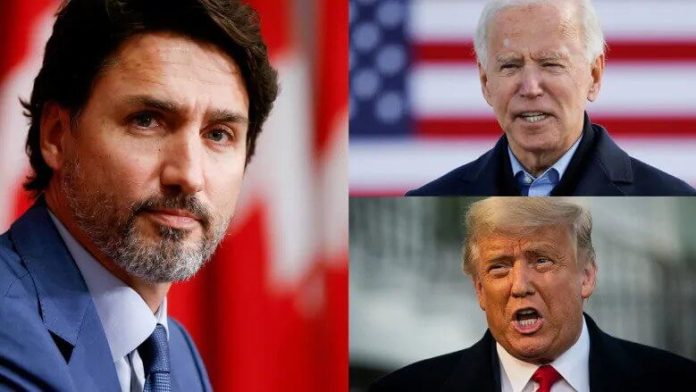 Why the election result is unlikely to affect Canada’s appeal to global talent and demand among those in the U.S. to move to Canada.

As the U.S. counts votes to determine the winner between President Donald Trump and former Vice-President Joe Biden, it is worth taking a look at how the election result will impact Canada’s immigration system and the desire of those looking to move to Canada from the U.S.

One may intuitively believe that a Trump win will help Canada in the war on global talent while a Biden win will restore the U.S. place as the most attractive destination in the world for global talent.

Irrespective of the final outcome, however, Canada will continue to have significant advantages over the U.S.

The U.S. has a math problem

The election result will not change the math problem that the U.S. has.

The U.S. has a population of roughly 330 million people, of whom about 160 million are workers. In recent decades, it has welcomed about 1.1 million immigrants per year. About 10 percent are welcomed as skilled workers, 70 percent under the family class, and 14 percent as refugees.

This means the U.S. has welcomed about 0.3 percent of its population as immigrants while its per capita intake of skilled workers as a share of its labor force is around 0.07 percent (110,000 skilled worker immigrants divided by 160 million workers).

Canada has a population of roughly 38 million people. Under its new 2021-2023 Immigration Levels Plan, Canada will aim to welcome over 400,000 immigrants per year beginning in 2021. This will result in an immigration rate of 1 percent. Canada has a labor force of about 20 million workers. It aims to welcome about 60 percent of immigrants as skilled workers, 25 percent under the family class, and 15 percent as refugees.

In 2021, Canada’s skilled worker intake will be about 1.2 percent of its labor force moving forward (240,000 skilled worker arrivals divided by 20 million workers).

This means that even though Canada’s labor force is eight times smaller than that of the U.S., it welcomes over double the number of skilled workers in absolute terms and about twenty times more on a per capita basis.

Due to the low number of available Green Card spots that the U.S. has to offer, talented individuals will continue to look north as they pursue permanent residence. In fact, this has been the case over the past five years.

When Canada launched the Express Entry system in 2015, it issued a total of 600 invitations to apply for permanent residence to candidates living in the U.S. In recent years, this figure has increased to more than 10,000 annually, with Immigration, Refugees and Citizenship Canada (IRCC) data suggesting some 85 percent of those invited being non-American citizens.

This strongly suggests the increase in skilled workers looking to move to Canada from the U.S. is a function of talent in the U.S. pursuing the certainty that Canada offers.

Successful candidates can obtain Canadian permanent resident status within six months or less under Express Entry. This is highly appealing to skilled workers in the U.S. who despite having lived there for several years do not know if they will ever be able to get a Green Card.

Uncertainty for skilled workers in the U.S. will persist irrespective of the election result due to the country’s math problem. There will remain far more demand among skilled workers and talent in other parts of the world for Green Cards than there will be available Green Card spots.

In addition, U.S. policymakers are unlikely to prioritize immigration reform due to the coronavirus. Rather, the next session of Congress will likely focus on fueling America’s post-COVID recovery. Moreover, it may prove difficult to enact immigration policy reform that would see the issuance of more Green Cards and temporary visas to skilled workers given the high unemployment rate in the U.S.

Given continued uncertainty, skilled workers in the U.S. and other parts of the globe will continue to turn to Canada. In addition to now seeking the arrival of over 400,000 immigrants per year, Canada offers many different pathways to international students and temporary foreign workers. Canada also facilitates the transition of study and work permit holders to Canadian permanent residence which is another highly appealing feature to such talent.

All this to say, we should not put too much stock in the U.S. election result impacting Canada one way or another including the appetite among those in the U.S. to move to Canada. Unless the U.S. suddenly changes course and significantly increases its skilled worker immigration levels, Canada will maintain an edge.