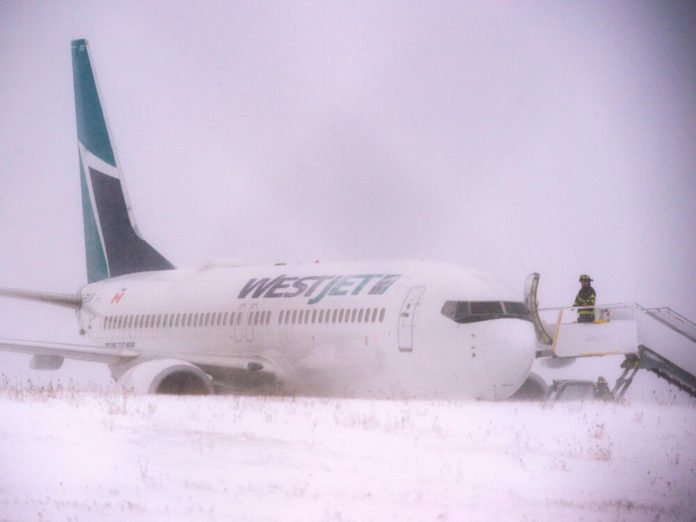 HALIFAX — Three investigators from the Transportation Safety Board of Canada are trying to determine why a passenger jet skidded off the end of a runway at the Halifax Stanfield International Airport over the weekend — the third such incident in the past two years.

WestJet Flight 248 landed in the midst of a snowstorm just afternoon on Sunday and overshot the runway with 172 passengers and seven crew members aboard.

There were no injuries and it remains unclear whether Boeing 737 was broken when it comes to a stop in a grassy area about 50 meters beyond the runway.

“There is preliminary information that there is no obvious damage to the plane,” said council spokesman Chris Krepski in an interview Monday. “WestJet maintenance organization to take a closer look at the aircraft.”

Including overrun on Sunday, there are seven so-called “runway excursions” or aircraft overruns at the airport in Halifax since 1999, according to a database compiled by the board – three of them in the last two years.

Krepski said the board has three main options when moving forward with an investigation of what happened on Sunday: It could conduct a thorough investigation and submit a full report with recommendations; can also submit a short report based on the investigation is limited, or it could simply add the basic details to its database if investigators determine there would be nothing to contribute to transport safety.

“Now, the Transportation Safety Board of Canada continues to collect information and we will assess that information to determine what the scope of the investigation may be,” said Krepski.

Runway 14 was reopened Sunday around 10:00 pm after the jet was towed away.

From the runway seven accidents reported since 1999, only one resulted in death or serious injury.

Council concluded inadequate training and crew fatigue contributed to the accident. An investigation determined the crew members failed to press the correct icon on the computer screen, which caused the plane to attempt an underpowered takeoff.

The most recent was on March 4, 2019, when the nose wheel of the Air Canada Boeing 767 with 211 passengers aboard slid off the runway of ice as the jet was moving slowly towards the gate. TSB find Runway 23 was so slick, jet spinning 180 degrees as it is manipulated by crosswind.

On November 7, 2018, a Boeing 747 cargo jet landing on Runway 14, failed to stop before it plowed through several approach lights and navigation equipment. SkyLease Cargo Aircraft severely damaged by the slide 210 meters from the end of the runway in rainy conditions. The Council is still investigating the accident.

Other incidents reported by the TSB:

– On April 24, 1999, Inter Canadian passenger jet was landing on Runway 33 in high winds when the plane turned left and the main landing gear into the grass.

– On December 25, 2005, a WestJet Boeing 737 landed on Runway 14 when the tip of the left-wing and other parts of the wing hit the runway, causing some damage.

– On 10 September 2010, a small F-86 Saber fighter jet hydroplaned on Runway 32 and the light struck the two lights at the end of the runway threshold.

This report by The Canadian Press first published January 6, 2020.