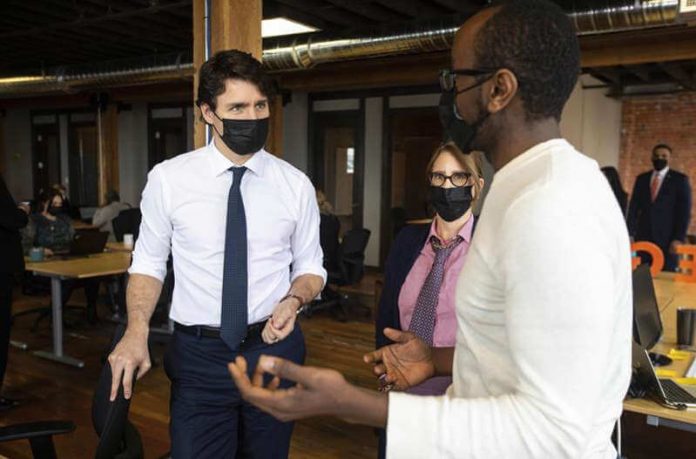 EDMONTON — Prime Minister Justin Trudeau criticized the Alberta government Tuesday for not addressing the opioid epidemic in ways that have proven to be effective elsewhere.

“As a government, we’ve continued to push for safe consumption sites,” Trudeau said at the old Mercer Warehouse, where he promoted his Liberal government’s budget plan to relax tax laws for small businesses.

Alberta’s United Conservative Party government has focused on a recovery-oriented strategy. Access to opioid dependency programs and drug-use sites has been limited.

“It’s unfortunate to see Alberta going in the opposite direction, away from a science-based and harm reduction approach. We know that municipal leaders, like here in Edmonton, are serious about supporting people through this terrible tragedy.”

A council committee on Monday voted to ask the city’s administration to explore the issue of decriminalizing simple possession of illegal drugs and provide recommendations by early next year.

Alberta last year recorded its deadliest year for drug overdoses since it began collecting data in 2016. Government figures show 171 people died in November and 178 in December — the highest single-month numbers ever — for a total of 1,758 fatalities in 2021.

In a post on Twitter, the press secretary for Mike Ellis, Alberta’smental health and addictions associate minister, referred to another tweet about Trudeau’s comments as “a joke.”

“People can recover, it is shameful he can’t recognize that,” said Eric Engler in the tweet.

Earlier in the day, Trudeau shook hands with entrepreneurs at the warehouse, which is home to StartUp Edmonton, a workspace and incubator for small-business owners.

“Canada has some of the best scientists, thinkers, entrepreneurs and innovators in the world,” Trudeau said. “But in order to bring those great ideas to market and help their businesses grow, they need support for research, development and mostly commercialization.”

The Liberal government’s proposal would allow companies to take advantage of Canada’s low small-business tax rate for longer and until their taxable capital reached $50 million — an increase from a previous $15-million limit.

Trudeau also met with members of the local Ukrainian and Afghan communities and visited a nature-based solutions lab to highlight investments in green technologies.
If you wish to advertise on Brampton-news, please Contact Us.

This story was produced with the financial assistance of the Meta and Canadian Press News Fellowship.