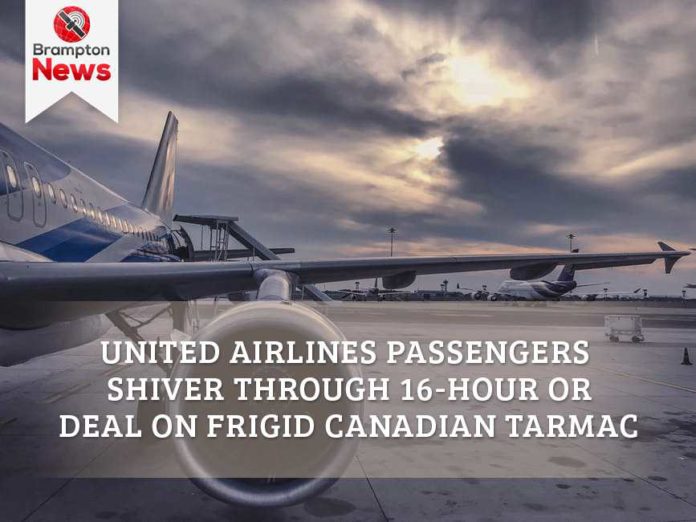 United Flight 179 had taken off late Saturday from Newark, New Jersey on the way to Hong Kong with around 250 travelers on load up.

A medicinal emergency and a mechanical issue left travelers on a United Airlines flight stuck for around 16 hours on the cold tarmac of a Canadian airport in the plane’s scarcely warmed inside, the CBC arrange announced.

At the point when a traveler suffered a medical issue, the plane made an emergency arrival at Goose Bay airplane terminal in Newfoundland and Labrador territory, on Canada’s east drift, the aircraft told CBC.

In any case, after paramedics took him to the hospital, the plane was not able to take off, reportedly because bitterly cold temperatures of -30 degrees Celsius (-22 degrees Fahrenheit) had caused a door to freeze.

Without any traditions officers on duty overnight, travelers were compelled to remain on board, many shuddering under the blankets passed out by flight specialists.

With food and water running short about 10 hours into the ordeal, authorities at long last landed to deliver supplies from the Tim Hortons fast-food chain known in Canada for its coffee and doughnuts.

One of the travelers, Sonjay Dutt, reached to by telephone, said the plane was under-warmed and that the entry of the food and coffee was insufficient to appease increasingly angry passengers.

A relief airship arrived base in Goose Bay late Sunday morning. After the travelers were exchanged to the plane by bus, it took off in mid-evening to take them back to Newark, where they initially originated from the day before, CBC said.

Much a bit of eastern Canada, just as the US northeast, has been enduring a glacial cold spell, with heavy snowfalls that have prompted scores of flight cancellations.

Toward the finish of the United ordeal, passenger Dutt tweeted that “it’s been a long, long day.”