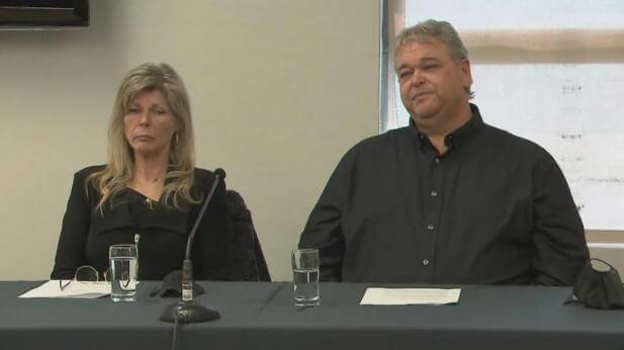 The parents of a man facing a second-degree murder charge spoke publicly on Monday for the first time since their son’s arrest, saying the tragedy could have been avoided had Quebec City police listened to their pleas for help.

Lucie Drouin and Daniel Lebel told a news conference they had repeatedly called the police since April 4 to seek help for their son, Kim Lebel, who was experiencing a mental health crisis at the time. Police spent 20 minutes with 30-year-old Lebel that Monday before deciding they didn’t need to intervene, despite his parents’ insistence they were afraid of what their son might do, Drouin said.

The family’s neighbor, Jacques Côté, 65, was stabbed to death outside his home in the small Quebec City suburb of Lac–Saint-Charles two days later, on the afternoon of April 6.

“We told them that we had needed their help since Monday. They didn’t take us seriously,” Drouin said.

The family is now considering legal action against the city, their lawyer Marc Bellemare said, saying it’s incomprehensible why police failed to act, especially after a court order demanding Lebel undergo a psychiatric evaluation was put in place the same day as the stabbing.

Lebel’s court order had been in effect as of noon that day, the lawyer said, about four hours before multiple 911 calls were made to police about the stabbing outside their neighbor’s home.

Drouin had also been urging police to come to the home as soon as she was able to get the court order, he said.

How to immigrate to Canada from Pakistan

“If the judge believed them, why didn’t the police?” he added. “It’s totally unacceptable.”

Lebel’s mother arrived at their home around 3:30 p.m. that afternoon, but said she struggled to calm her son down, saying he was in “full crisis.”

“I said hurry up and send a patrol, it’s dangerous. Come quickly and do something!” Drouin said.

“They told me not to worry,” she alleged.

Lebel has since been charged with second-degree murder in the death. His parents have said he has a long history of mental illness.

“They didn’t take us seriously despite all the steps that we as parents took,” Drouin said. “This tragedy should never have happened. Everything was in place to avoid it.”

An investigation by Quebec’s police watchdog into how police handled the case is ongoing.

The Bureau des enquêtes indépendantes(BEI) had initially left the investigation in the hands of local police but later announced on April 8 that an independent investigation had been launched “in light of new, recently obtained information.”

Provincial police will be investigating the circumstances surrounding Côté’s death, and four BEI investigators will be looking into how Quebec City police handled Lebel’s parents’ concerns and the evaluation of Lebel’s mental state.

Both the BEI and Quebec City police have said because the case is now before the courts, they would not provide any further comments.