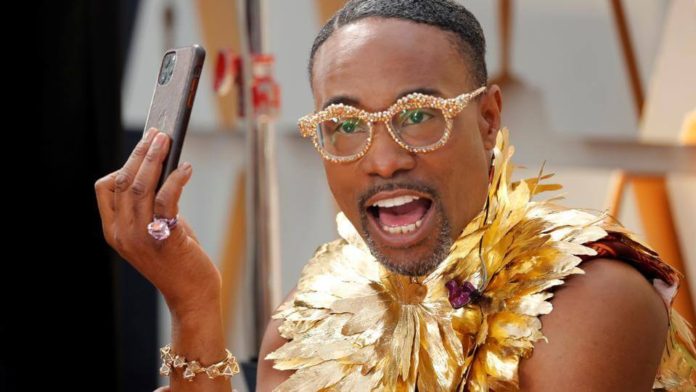 Oscars 2020 is the most awaited awards of the year, and also mark the end of the awards season. Hollywood celebrities united at the Dolby Theatre in Los Angeles for the 92nd Academy Awards celebrations. The awards have been taking place here since 2002. And while celebrities were dressed to the nines, the Sunday event was marred by heavy rains, and though it dampened the red carpet, it didn’t dampen the spirit of the celebrities. Just their hairdos and outfits a bit.

Pose star Billy Porter had promised a surprise for Sunday’s Oscars 2020 red carpet – and he delivered with a gold-filled grand entrance. Porter, who has dominated red carpets in the past year with headline-grabbing, gender-fluid outfits, kicked off the ceremony in a Giles Deacon custom couture outfit, rocking a gold-feathered top and a voluminous printed gown paired with custom Jimmy Choo shoes – also golden. “Welcome to the #academyawards2020. Let the fashion games begin!,” Porter wrote in a Twitter post in which he shared a photo and details about his outfit. Billy Porter paid homage to the Cupola Room at Kensington Palace in a 24-karat bodice of gold feathers. The custom made orange silk ball skirt was printed with touches paying homage to the Cupola Room at Kensington Palace.

Rain threatened to dampen – if not the mood, perhaps some of the elaborate hairdos and dresses of the many Hollywood stars walking the red carpet on Sunday afternoon.

The power of pink

Actress Regina King, one of the night’s presenters and the winner of last year’s best supporting actress award for her role in the film adaptation of James Baldwin’s novel “If Beale Street Could Talk,” walked the red carpet in a single-strap light pink Versace gown with a diamond-laced top. 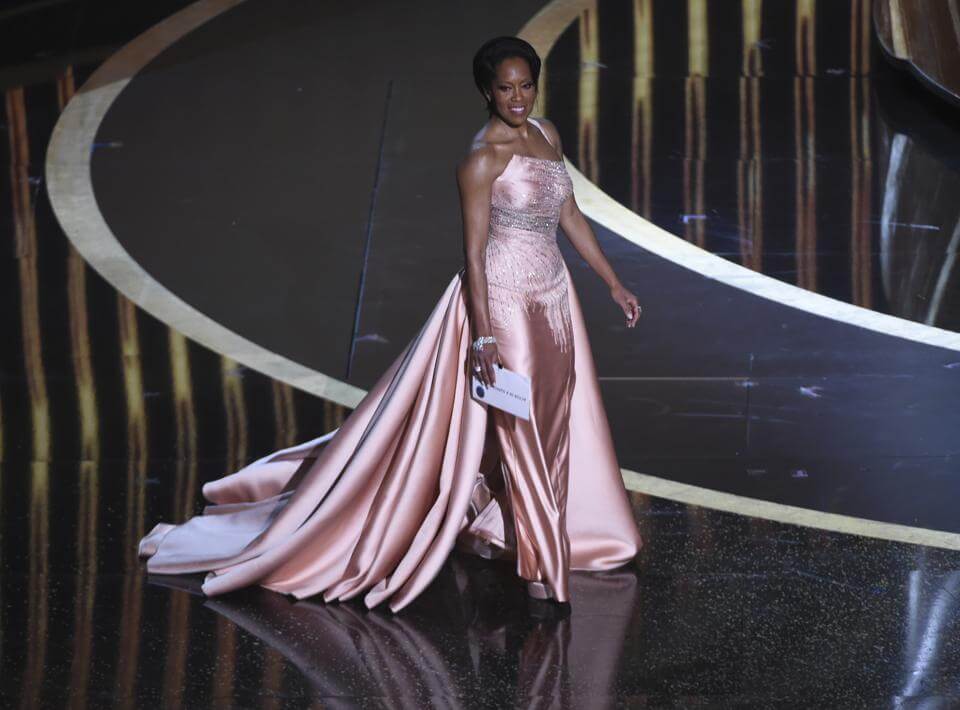 “I think it works with the weather because it’s warm,” King said, jokingly referring to the chilly weather outside the Dolby Theatre in Los Angeles.

Asked by TV personality Ryan Seacrest about last year’s win, she responded, “It’s still surreal in a lot of ways for the piece that it was that I won for — that James Baldwin has so much to do with American culture, American literature. I still can’t believe that this is the anniversary of that moment.” 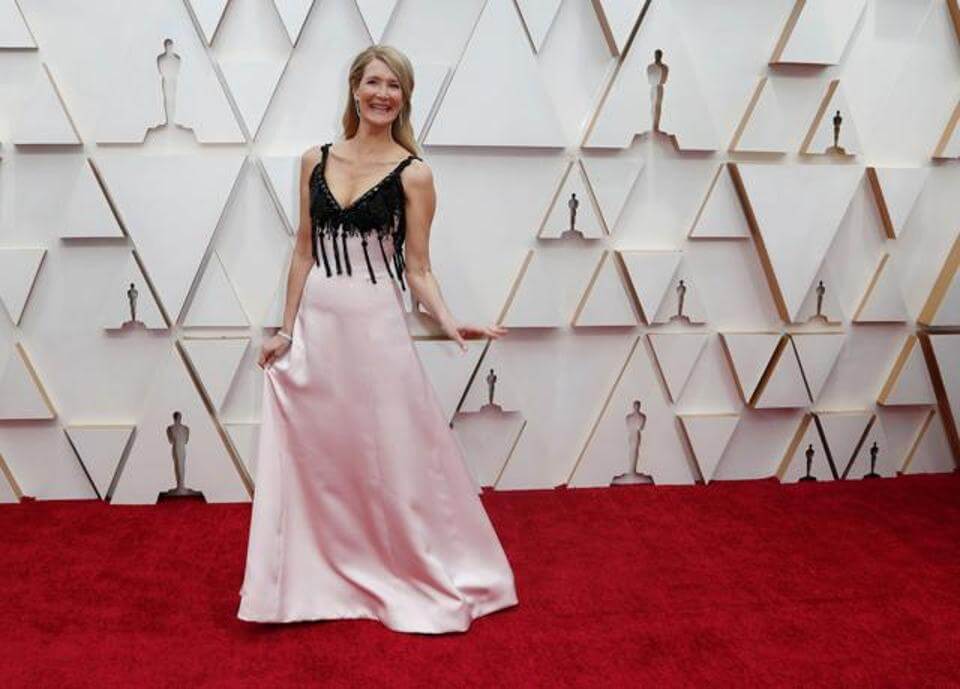 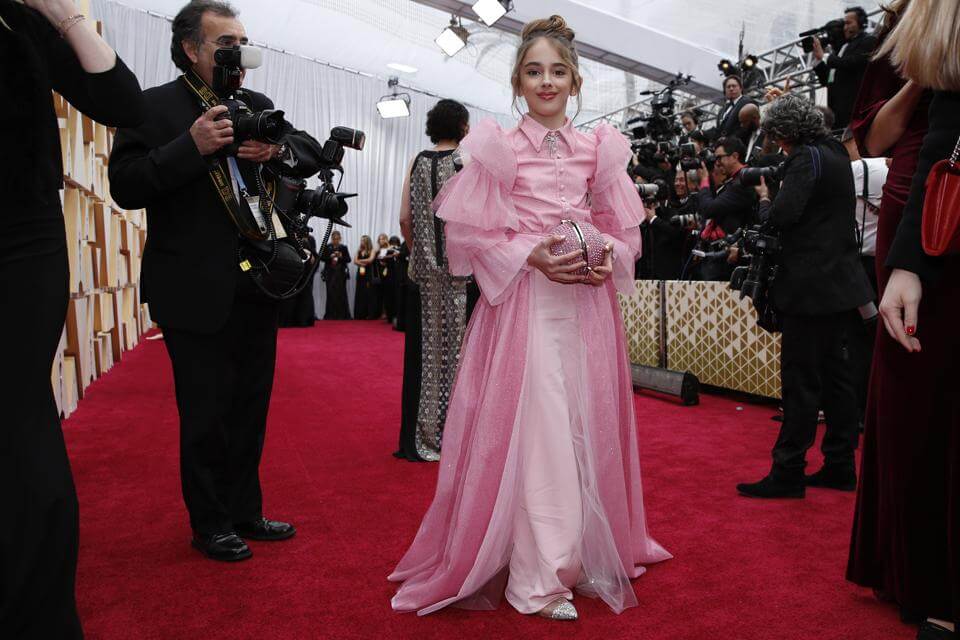 Julia Butters, the 10-year-old actress who starred in “Once Upon a Time in Hollywood” alongside Brad Pitt and Leonardo DiCaprio, chose a pink Christian Siriano dress with puffy sleeves and reportedly stashed a turkey sandwich in her designer purse.

“Julia Butters brought a turkey sandwich in her purse because ‘I don’t like some of the food here,’“ Los Angeles Times reporter Amy Kaufman wrote in a Twitter post that showed a photo of a smirking Butters and her sandwich. 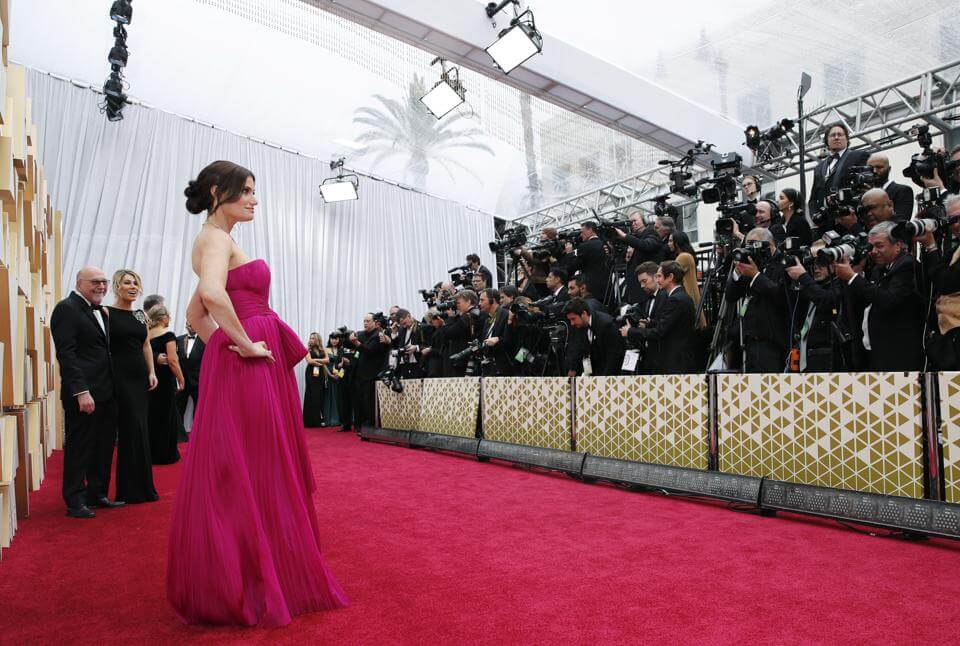 Idina Menzel wore a strapless magenta J Mendel gown with a voluminous sash. She, along with several other actresses who voice Queen Elsa in foreign-language versions of Frozen II performed the nominated song from the film. She wore an off-shouldered white gown for her performance. 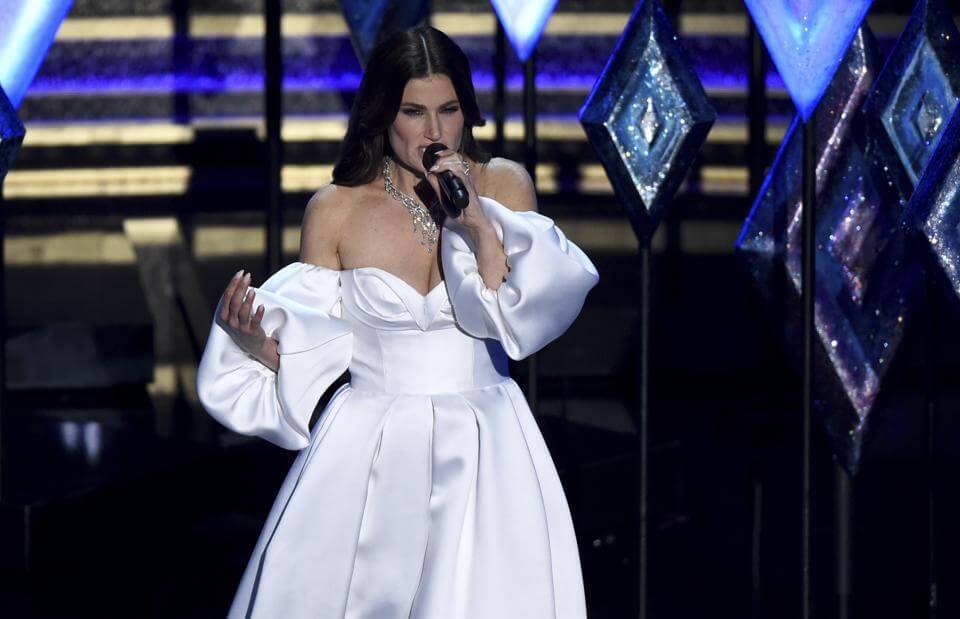 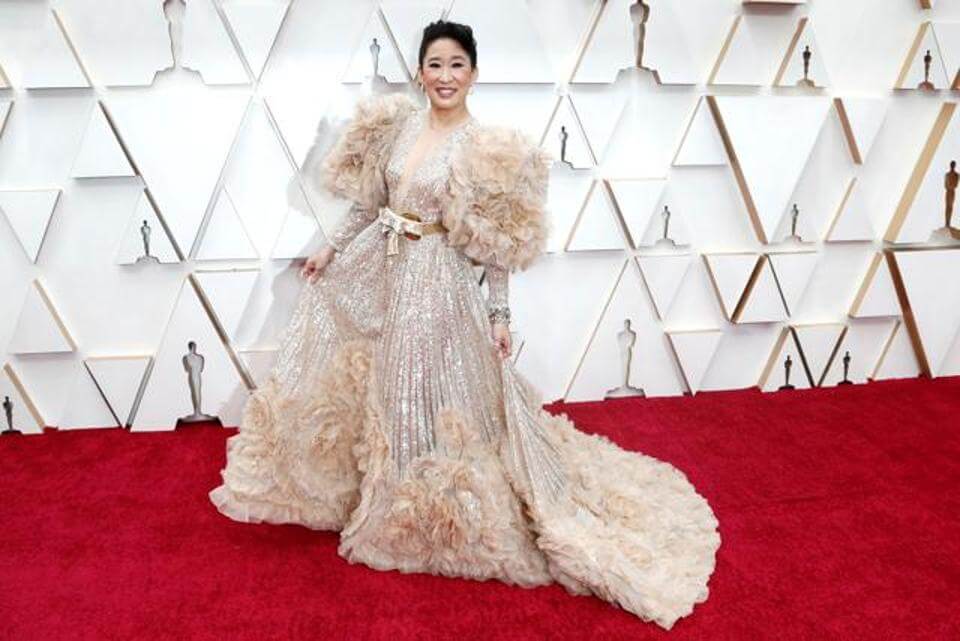 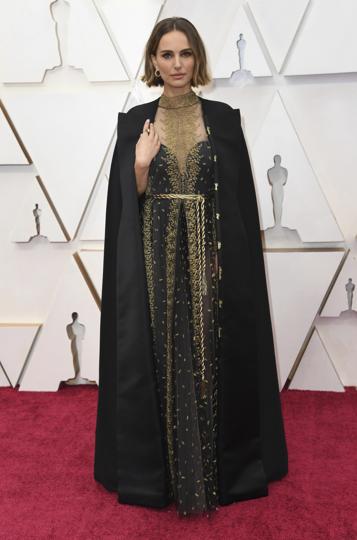 Natalie Portman decided to take a stand for the female directors who were not nominated for an Oscar at the ceremony this year. The black cape of her black and gold embroidered Oscars 2020 outfit by Dior featured names of directors such as Lulu Wang, Greta Gerwig, Lorene Scafaria, Marielle Heller and Mari Diop, and others. Although embroidered subtly along the left front hem of her cape, the names were still pretty visible. Natalie explained according to the Los Angeles Times, “I wanted to recognize the women who were not recognized for their incredible work this year in a subtle way.”

She took a stand regarding the same during the Golden Globes in 2018 when she was presenting the best director award, she said, “And now, here are the all-male nominees”. 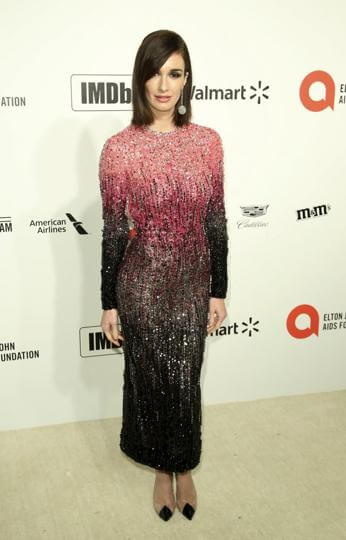 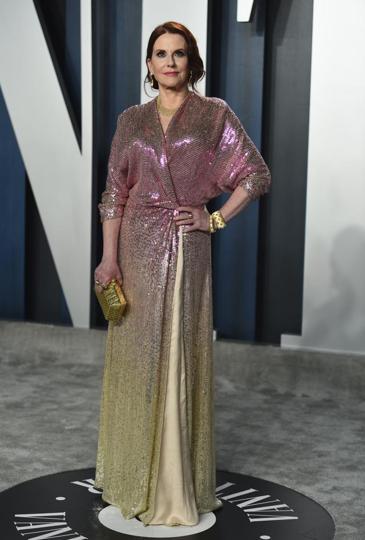 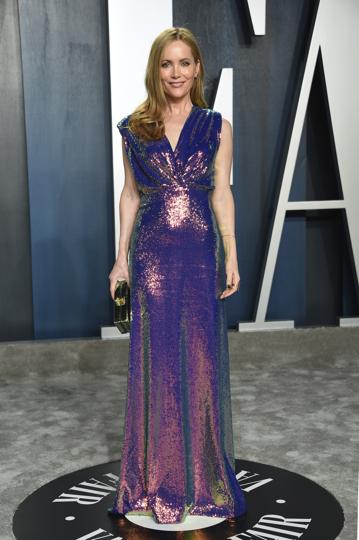 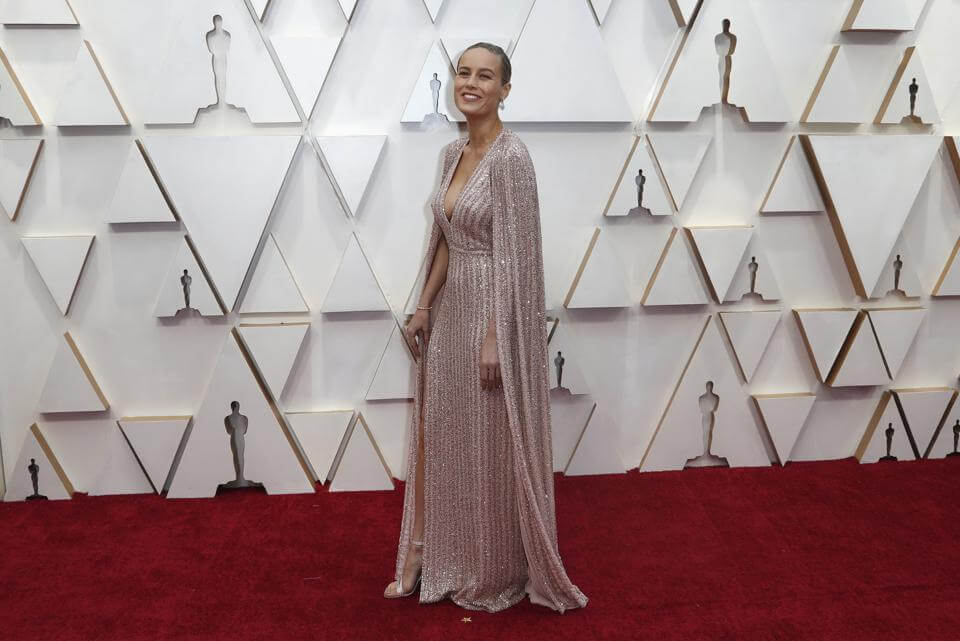 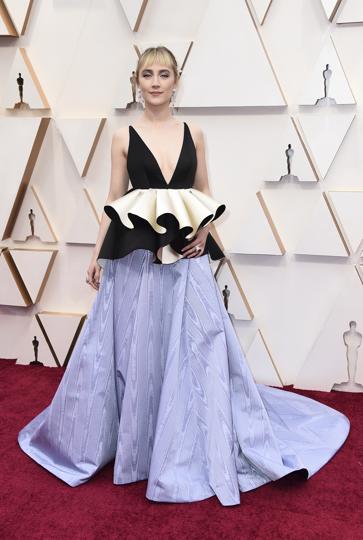 Irish actress Saoirse Ronan wore an ensemble by Gucci and sported fly-shaped embellishments in her hair which was tied up in a bun and had bangs. Her outfit included a purple skirt with a black and white peplum top. 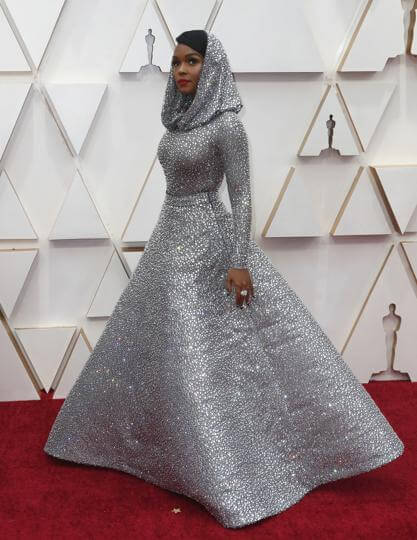 Singer Janelle Monae, as usual, did not keep it safe like most of the celebrities on the red carpet. She looked absolutely stunning in a full-sleeved silver Ralph Lauren dress which is reported to be embellished with about 170,000 Swarovski crystals.

Billie Eillish in all Chanel 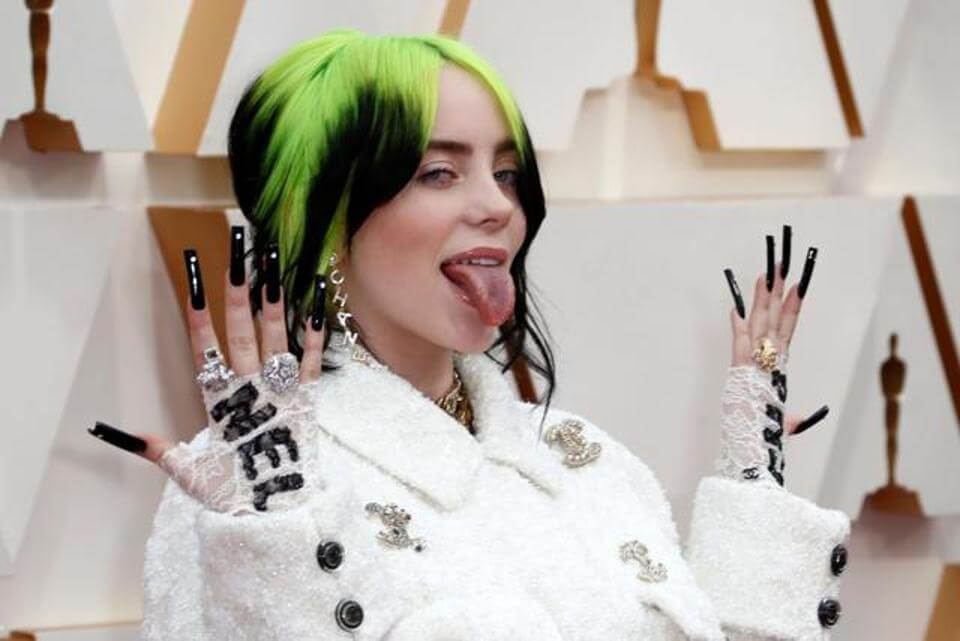 Five-time Grammy Award winner Billie Eilish, who was set to perform at the Academy Awards, wore all Chanel for her red carpet look. The teen pop star sported a white wool Chanel coat, baggy pants and sneakers topped off with long black-painted nails and her trademark green hair. She also wore fingerless white lace gloves with Chanel typography and a Chanel scrunchie with an embellished Chanel logo securing her low bun.