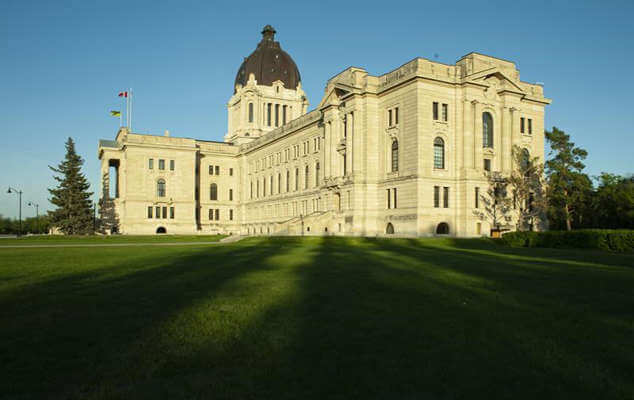 An Independent member of the legislature has revived a 20-year-old scandal involving the Saskatchewan Party to show her concerns about a bill that aims to reform legislative security.

Nadine Wilson suggested in the house Thursday that history could be repeated and staff spied on should the bill aimed at having security officers report to the governing party pass.

Wilson declined to comment further other than to say she is opposed to the bill.

She did table two affidavits that say the Saskatchewan Party, while in opposition, placed a hidden camera in one of its member’s offices in 2002 without advising the sergeant-at-arms.

The affidavits came from former Sask. Party legislature members Jason Dearborn and Denis Allchurch. Their statements were sworn in front of a notary earlier this month.

They say their caucus was informed at the time of a hidden camera by Reg Downes, who is now special adviser to Premier Scott Moe.

The party has admitted the camera was placed in former MLA Brenda Bakken’s office to catch an employee who was allegedly stealing from her and was ultimately fired after being caught.

Moe said the hidden camera was placed at Bakken’s request.

“There hasn’t been an incident since,” he said.

He criticized Wilson for raising the decades-old matter and encouraged her to resign from her Saskatchewan Rivers seat. She left the party’s caucus last year after misrepresenting her COVID-19 vaccine status.

Canadian former contestants on the science of ‘Jeopardy!’ bets

“It’s fair to say that it’s time for that member to put her name on a ballot in a byelection and ask her constituents, ‘Are these the questions they want her asking?'” Moe said.

Wilson said she would not resign. She raised the scandal in the house because her constituents share her concern, she said.

The government has offered few details on the bill, which proposes there be a government-appointed director to oversee security in the building and on the legislature grounds.

Powers the sergeant-at-arms now has would be reduced to supervising security in the chamber and to conducting ceremonial duties.

On Thursday, Moe alluded to sheriffs being brought in to help with security, but he didn’t expand on what their scope would be.

“I don’t know the answer to … what degree of powers they’ll have,” Moe said.

“You will know the scope of their role as we pass (the bill), which is still on the floor of the legislature.”

The Opposition NDP said the bill, if passed, would result in a partisan police service that would report solely to the minister of corrections, policing and public safety.

New Democrat Leader Ryan Meili said he doesn’t feel assured that the Saskatchewan Party wouldn’t use the legislation to spy on staff.

“You have a situation where we’re moving away from the sergeant-at-arms, and have a director that will report directly to a minister,” Meili said.

“Then I start to worry about what happens in my office? What happens to anybody’s office here if we have a party that already has that track record and is now creating more opportunities for inappropriate surveillance.

This report by The Canadian Press was first published April 28, 2022.