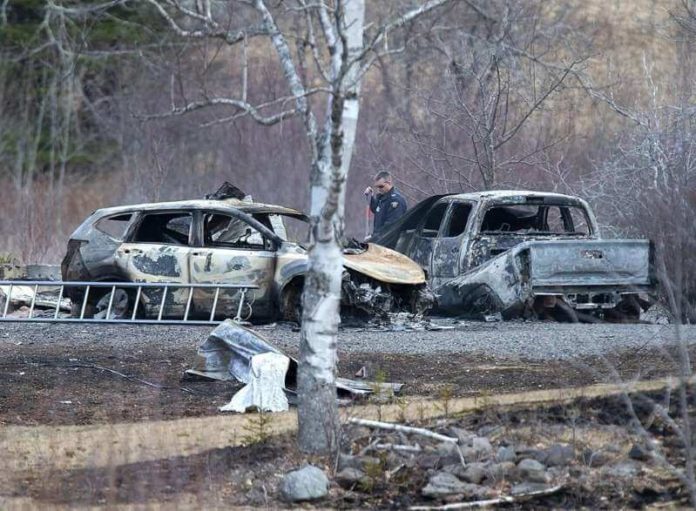 Warning: This story contains content that may be disturbing to some readers. Discretion is advised.

The killings that began Saturday night in the rural Nova Scotia community of Portapique and ended the next morning with the death of the gunman at a gas station started with domestic violence when Gabriel Wortman attacked his girlfriend, sources tell Global News.

Investigators believe Wortman and his girlfriend were at a party at a nearby home in the Portapique area when Wortman began arguing with her. They left the party and sources believe Wortman escalated the argument back at his cottage — assaulting her and tying her up. She escaped and hid in the woods.

Wortman left his cottage after the assault and investigators believe that’s when the shootings started. He returned to the house where the party was being held and killed several people there, sources said.

Global News has learned that Wortman had access to multiple guns over the course of the rampage — a rifle, a handgun, and a shotgun, sources said. Global News does not yet know how he obtained those guns.

WHO set pandemic response back by 2-3 weeks, says doctor on federal task force

Portapique is a small, rural community on the banks of the Cobequid Bay and the Portapique River and just off Highway 2. RCMP said Wednesday they set up two perimeters in the area but at some point in the evening, learned Wortman had made it past undetected.

Police found Wortman’s girlfriend around 7 a.m. local, sources said. It was from her they learned he was likely dressed as a police officer and driving a fake cruiser. She also provided a picture of the vehicle that was widely distributed. The information changed the way police were searching for Wortman.

Police first tweeted about Wortman at 9:04 a.m. local time Sunday. Less than an hour later they tweeted again warning he may be driving what “appears to be an RCMP vehicle & may be wearing an RCMP uniform.”

#Colchester: Gabriel Wortman may be driving what appears to be an RCMP vehicle & may be wearing an RCMP uniform. There’s 1 difference btwn his car and our RCMP vehicles: the car #. The suspect’s car is 28B11, behind rear passenger window. If you see 28B11 call 911 immediately. pic.twitter.com/yyeOeBt8Ui

Sources confirmed to Global News that Wortman shot RCMP Const. Heidi Stevenson in the chest before dragging her from her car and shooting her again.

He stole her handgun, sources say. It’s not known whether he used the handgun on any of his victims.

The RCMP has handed aspects of the investigation to the Team Serious Incident Response (SIRT), a body affiliated to investigate “all matters involving death, serious injury, sexual assault, and domestic violence or other matters of significant public interest that may arise of the actions of police officers in Nova Scotia, “according to its website.

Police have not commented on possible motives, they also did not say whether the murder was planned.

A member of the RCMP Emergency Response Team and an RCMP officer K9 see Wortman at a gas station in Enfield, N.S., when they stopped there. Wortman realizes the police have seen it and went for his gun but highly trained ERT officers shot and killed him before he could shoot the police, sources said.

“Detailed and complex investigation,” the RCMP said in a statement Tuesday. “The investigation team is focused on learning more about this very tragic situation, including victims of accurate information and whether anyone else might have helped the suspect.”

RCMP are investigating 16 scenes throughout the province and, on Tuesday afternoon, said at least 22 people were killed.

RCMP did not say how many victims Wortman know.

RCMP refused to comment on the news when contacted global story as the investigation is ongoing.