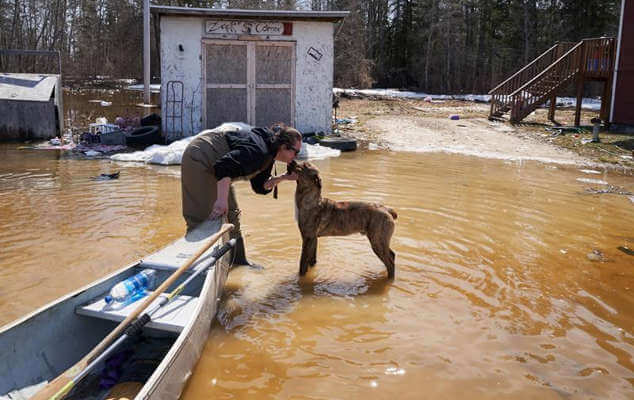 Days of warm, dry weather appear to be helping the fight against flooding in Manitoba.

The Fisher River, which has spilled its banks and forced some 1,400 people from the Peguis First Nation to leave their homes, is at or near its peak and will gradually drop to within its banks next week, the province’s top flood forecaster said Thursday.

“It could go up, down a few centimeters… it’s going to stay there a few more days,” said Fisaha Unduche, executive director of hydrologic forecasting and water management for the Manitoba government

“It’s going to be a very gradual recession. That’s why it will take another five to seven days before it comes to the banks.”

There is no major precipitation in the forecast for the next two weeks, which should allow rivers and tributaries to drop. Some showers forecast for Sunday are not expected to be enough to have any effect, Unduche said.

The news was welcomed by Chris Ewan, mayor of the Rural Municipality of Ritchot, which covers a large area along the Red River south of Winnipeg.

How to gain permanent residence through the Canadian Experience Class

The river has become a lake in many areas, flooding farmland and roads. Communities in the Red River Valley are protected by dikes and diversion channels, but sandbagging efforts have been underway to offer more protection to outlying properties.

“The amount of water we’re dealing with right now is unsustainable,” Ewan said.

The municipal government has served 180 homes with evacuation notices and about one-third of the people have left. More than 20 roads are closed in the region.

Further south, a section of the main highway between Winnipeg and the United States border remained closed Thursday, which forced motorists to take a long detour to the west.

The Red is expected to peak next week, but at a slightly lower level than predicted a week ago. That should allow communities to keep portions of their dikes open so they can maintain road access to the outside world, officials said.

Peguis First Nation had requested a helicopter earlier in the week, the provincial government said but was turned down in part because the community still had road access.

“We feel that, if there’s anything in the future … where they can’t get out of their communities, then we’ll look at an option like that,” Transportation Minister Doyle Piwniuk said. Operating a helicopter costs about $10,000 an hour, he later added.

Piwniuk’s press secretary later clarified the minister’s remarks. The request was to have a helicopter stationed in Peguis on standby for any potential medical evacuations, Miranda Dube said.

Piwniuk said he and Premier Heather Stefanson visited Peguis this week, but were unable to get as far as the band office.

This report by The Canadian Press was first published on May 5, 2022.