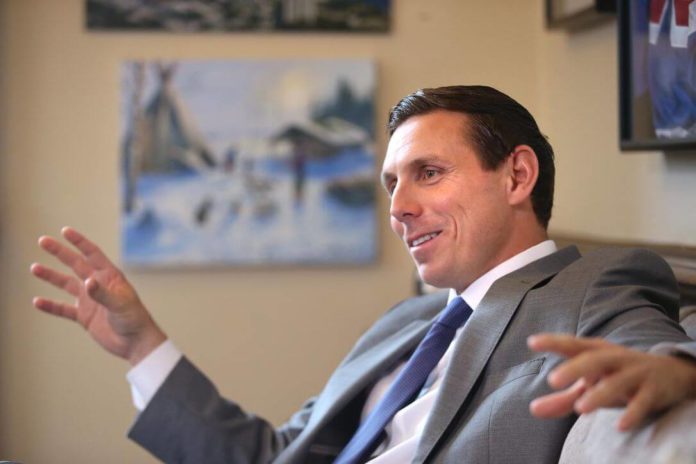 1. Candidate Bio:
Patrick’s roots run deep in Brampton. His father, Edmond, has been practicing law in Brampton for decades – before the Bill Davis Court House was even built. After graduating from the University of Windsor Law School in 2004 and being called to the bar in 2005, he began practicing law in Brampton. Today Patrick and his wife Genevieve Gualtieri live in downtown Brampton near Gage Park, enjoying all the aspects of city life that make Brampton such a special place.

Patrick and Genevieve share a love for community service.  Genevieve works for the SickKids Foundation, and Patrick has dedicated his life to serving the public. He served two terms municipally as a City Councillor, three terms in the Federal Parliament of Canada, and most recently as the Provincial Leader of the Official Opposition at Queen’s Park.

Patrick’s philosophy on politics is: “There is no monopoly on a good idea and we all need to work together to better serve our community.” His years of public service have given Patrick great experience into what does, and doesn’t, work at all three levels of government, and earned him a highly regarded reputation for getting the job done. It has also provided Patrick with a deep knowledge of this City – its’ people, its’ issues, and its’ tremendous potential.

Despite his hectic schedule, Patrick always makes time to spend with his family, particularly his three beloved nephews. He is an avid hockey and tennis player and has run in more than a dozen full-marathons and over 50 half-marathons.

2. Professional Career
Patrick has a broad background in government and a highly regarded reputation for getting the job done. He served two terms municipally as a City Councillor, three terms in the Federal parliament and most recently as the Provincial leader of the opposition at Queen’s Park. Patrick served on the Federal Justice Committee and Health Committee and Chair of the Government GTA Caucus from 2011 to 2015. He is a former Chair of the Canada India Parliamentary Association, a former Vice Chair of the Canada Pakistan Parliamentary Friendship Association, an honorary citizen of Gujarat and was awarded the Canadian Human Rights Voice National Award for his role in exposing the Tamil genocide. Patrick is an honorary firefighter and takes pride in working closely with our first responders.

3. What are your three top priorities for Brampton?

Combat Crime
Brampton residents want solutions to the disturbing level of violence in our City.  As Mayor, Patrick will ensure police have what they need to hold criminals accountable.  Patrick has already formed the Patrick Brown Public Safety Initiative.

Less Congestion
Highway 410 is a parking lot.  Brampton still doesn’t have all-way, two-way GO service. As Mayor I will provide dynamic leadership on this file, insisting that the federal and provincial governments transfer to Brampton its fair share of transit funding.

Better Healthcare
As Mayor, Patrick will push the provincial government to provide Brampton with a new, state-of-the-art hospital; insist that Brampton Civic and Peel Memorial Hospitals are properly funded, and advocate for immediate funding to address emergency care wait times.