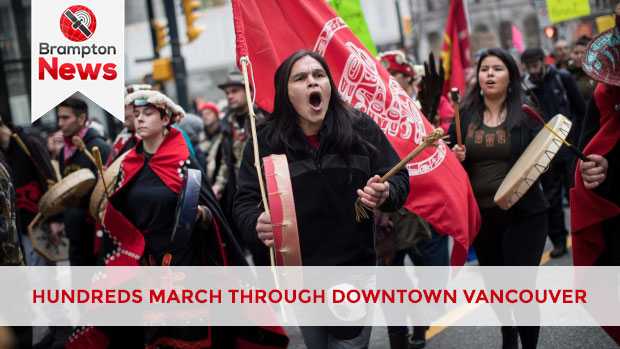 Pipeline protests in support of a local barricade in Northern B.C. drew several individuals in B.C., Tuesday. Groups assessed at 300 in number spilled into downtown Vancouver lanes, shutting streets between the common courthouse and Victory Square.

Police closed streets and guided the gathering as it walked and recited.

Protesters likewise turned out in Victoria, where a gathering called “Rise and Resist” aroused outside the common council in the help of the Wet’suwet’en First Nation.
– with documents from CTV Vancouver

Dozens of protesters are delaying an appearance by the prime minister Tuesday afternoon, drumming and reciting in a government building where Justin Trudeau was set to talk.

Police have kept Trudeau out of a Sussex Drive office building in Ottawa, where he’s to address a gathering uniting government authorities and delegates from self-governing First Nations that have “modern” treaties with the Crown.

The protesters are angry about the RCMP’s intervention in a bar in northern British Columbia, enforcing an order from the B.C. Preeminent Court.

The order is to remove any individual who meddles with a Coastal GasLink pipeline project in and around the Morice River Bridge.

Individuals from the Gidimt’en tribe of the Wet’suwet’en First Nation have set up a camp and a checkpoint southwest of Houston, B.C., on a forest service street that prompts a pipeline building site.

Waterfront GasLink says it has consented to arrangements with every First Nation along the course however demonstrators state Wet’suwet’en house boss, who are genetic instead of chosen, have not given consent.

The government NDP’s reconciliation pundit says the avocation utilized for the RCMP’s intervention is”pretty lame” in a time of assumed compromise with Indigenous Peoples.

Romeo Saganash joined demonstrators on Parliament Hill before the gathering walked through downtown Ottawa streets with signs including a considerable red one reading: “RCMP Off Wet’suwet’en Land.”

Canada’s most in-demand jobs for 2020

Saganash says he didn’t hear again from the commonplace and government Indigenous-issues ministers he requested to help alleviate tension in northern B.C. before the arrests by the Mounties.

Dozens of rallies are arranged in British Columbia, crosswise over Canada and as far away as Europe to help pipeline protesters captured in northwestern B.C.

Fourteen individuals were arrested Monday at a blockade southwest of Houston, B.C., where individuals from the Gidimt’en faction of the Wet’suwet’en First Nation had set up a camp to control access to a pipeline project across their territory.

An RCMP statement says the captures came after officers understood a goal was improbable, even though they had talked with camp individuals about evacuating the blockade and set up a gathering between hereditary chiefs and the pipeline company.

Police say an impermanent prohibition zone is presently set up along the remote street and will be reliably re-surveyed.

TransCanada subsidiary Coastal GasLink got a directive requesting expulsion of hindrances in the zone as fundamental work gets in progress on a pipeline conveying flammable gas from northeastern B.C. to Kitimat.

A social media message posted early Tuesday on a website supporting the Gidimt’en says “we are presently planning a protracted struggle.”

LNG Canada reported in October that it was pushing forward with it anticipates a $40-billion pipeline and condensed petroleum gas send out office in Kitimat.

Construction on the $6.2-billion, a 670-kilometer pipeline connecting gas makers in the Dawson Creek territory with the Kitimat send out the plant, is scheduled to start this month.

TransCanada says it has consented to arrangements with every First Nation along the route however demonstrators contend Wet’suwet’en house boss, who are inherited as opposed to chose, have not given consent for work through their territories.