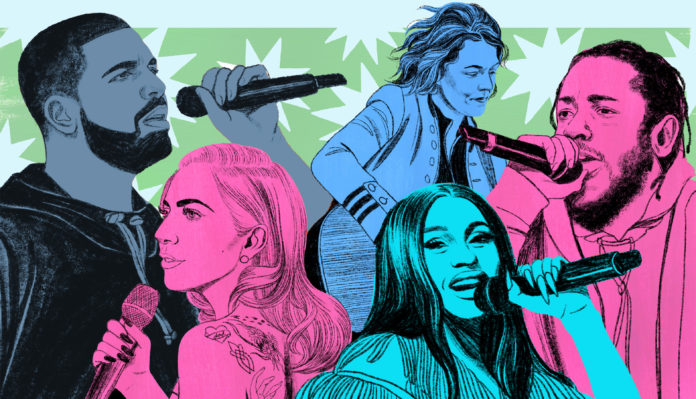 Music’s biggest night is almost here. This Sunday, the 61st yearly Grammy Awards will be held in Los Angeles, hosted by Alicia Keys and featuring performances from Cardi B, Kacey Musgraves, Diana Ross, Brandi Carlile, H.E.R., Shawn Mendes, Camila Cabello, and then some. You can watch everything go down live on Feb. 10 at 8 p.m. ET on CBS.

So here are our best guesses for the 2019 Grammy Awards.

Album of the Year

This is a really fucking weird group of nominees for Grammy Awards. Furthermore, after Bruno Mars’ 24k Magic beat out Kendrick Lamar’s Damn, Childish Gambino’s Awaken, My Love, Jay-Z’s 4:44, and Lorde’s Melodrama in 2018, I have no confidence left in this category. For what reason is Kendrick’s Black Panther soundtrack named here? Is it a consolation award for screwing him a year ago? Is it so they can motivate him or his numerous colleagues to perform at the ceremony then not give them a genuine honor? Likely. Here’s an insane certainty. Drake has been nominated for 42 Grammys and just won three. After the record-breaking achievement of Scorpion, it’s feasible time for the Recording Academy to give Drake his Album of the Year. Why? Since it’s among the weakest albums in his catalog, but the Recording Academy that likes anything that makes money.

Who Should Win: No other artist commanded the charts and the conversation like Cardi B did in 2018. If Album of the Year meant anything, Invasion of Privacy would be the 2018 Album of the Year.

Grammys Gonna Grammy: Watch them give it to Post Malone, just to own the libs.

Song of the Year

Who Will Win: Look, I guess I’m going to put my money on Drake this year, pretty much for the reasons outlined above. Although, in this case, “God’s Plan” is actually a good song. Drake released it in early 2018 and the thing pretty much dominated the charts for the next 12 months.

Who Should Win: No other song captured the spirit, the outrage, and the frustration in America in the summer of 2018 like Childish Gambino’s “This Is America.” The video and the song have become cultural cornerstones of this time in this country. And, the song was clever enough to package these themes into a radio-friendly bop.

Grammys Gonna Grammy: I love “Shallow” as much as the next white person, but it’s not as much a song as it is a handful of choruses stuck together with masking tape. The structure is baffling, but no one is paying attention to that once Lady Gaga’s AAAHHHHHHHAAAHHHAAAAAHAHAHAA comes in.

Will Win: This category—somehow more than the others—is always a fucking tossup. I truly believe that the majority of the Recording Academy voters have no idea who any of these people are and just randomly pick a name. That said, they’ll probably go with Greta Van Fleet, because even though this is a band that “did weed exactly once, called the cops, and tried to record a Led Zeppelin album before they arrested themselves,” the Grammy Awards LOVE to pretend that rock music is still relevant while also giving this award to the act guaranteed to go on to do absolutely nothing at all.

Who Should Win: I was as shocked as anyone when Chance the Rapper actually won this category in 2017. So maybe this year they’ll give this award to Dua Lipa, an artist who’s poised to become the next great pop star.

Grammys Gonna Grammy: Seriously, watch them give it to Greta Van Fleet, a band that not even Robert Plant likes. I’m going, to be honest: I feel bad for these kids.

Record of the Year

Who Will Win: Do you remember last year when Bruno won literally every major category? Yeah, I’m predicting that again this year, but for Drake. Because what is Drake other than a hip-hop version of Bruno Mars?

Who Should Win: Again, “This Is America” was by far the most defining song of this year, but, I think this is a category that Cardi B’s “I Like It” also deserves to win.

Grammys Gonna Grammy: Record of the Year is a category that recognizes the artist’s performance and the producers, engineers, etc. who contribute to making and recording the song. So, horrible, misogynist, braindead lyrics aside, the Grammy Awards are sure to recognize a nauseating, repetitive half-drunk chant of three notes like Post Malone’s “Rockstar.”