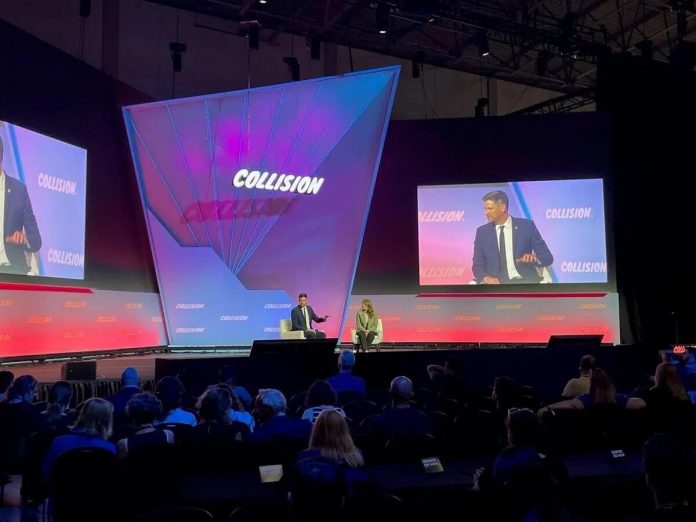 Minister Fraser sat down with CIC News in Toronto this week to discuss the future of Canadian immigration. CIC News is releasing a special series on the interview over the coming weeks. In Part 1, we discuss the likely return to all-program draws next month.
In an interview with CIC News, Immigration Minister Sean Fraser said Canada aims to resume all-program Express Entry draws on Wednesday, July 6.

CIC News sat down with the minister in Toronto on June 21, 2022 to discuss the future of Canadian immigration.

Over the coming weeks, CIC News is releasing a special series of articles elaborating on the interview with Minister Fraser on topics including:

Minister Fraser was in Toronto to speak at Collision, one of the world’s largest technology conferences.

Fraser confirmed that Immigration, Refugees and Citizenship Canada (IRCC) is on track to normalize Express Entry draws in early July. IRCC made the commitment in April and also pledged to get the Express Entry service standard back to six months when the all-program draws resume.

Prior to the pandemic, IRCC usually considered all candidates in its bi-weekly Express Entry draws. This meant IRCC would invite the candidates with the highest Comprehensive Ranking System (CRS) scores, irrespective of their program of eligibility.

IRCC temporarily shifted its approach during the pandemic. The pause in FSWP and FSTP draws were justified on the grounds that it made strategic sense to prioritize economic class immigration candidates in Canada while the country had international travel restrictions in place. For much of last year, IRCC prioritized CEC candidates so it could achieve its goal of landing 401,000 new permanent residents by the end of 2021.

However, this, along with other developments resulted in significant growth of applications in IRCC’s inventory. In order to get its inventory under control and to improve its Express Entry service standard, IRCC decided to also pause Express Entry invitations to CEC candidates in September 2021. Meanwhile, Express Entry invitations to Provincial Nominee Program (PNP) candidates have continued throughout the pandemic as IRCC has sought to help advance the economic development of provinces and territories across the country.

How the all-program draws will affect Express Entry candidates

The return to all-program draws will be welcome for FSWP, FSTP, and CEC candidates alike.

From its inception in 1967 until the start of the pandemic, the FSWP was the main pathway for economic class immigrants to come to Canada. Pre-pandemic, it accounted for some 45 percent of all those invited for permanent residence via Express Entry.

Research by World Education Services (WES), one of the Educational Credential Assessment (ECA) providers designated by IRCC, suggests that there remains strong demand for FSWP candidates to go ahead with the Canadian immigration process despite what has transpired over the pandemic.

Meanwhile, the resumption of draws to CEC candidates will help those in Canada maintain their legal status to reside in the country. When an Express Entry candidate in Canada gets an ITA and then submits their permanent residence application, they have an opportunity to also apply for a bridging open work permit (BOWP). The BOWP enables them to maintain their legal status in Canada while their permanent residence is being processed.

CEC candidates have not been able to benefit from the BOWP in the absence of ITAs to them since September 2021. Recognizing this, IRCC also announced in April that it would be offering an open work permit extension to the main cohort of CEC candidates effective this summer. This cohort is those who have recently seen or are soon set to see their Post-Graduation Work Permit (PGWP) expire. No word is available yet on when IRCC will begin to accept open work permit applications for these individuals.

How does Express Entry work?

Introduced in 2015, Express Entry is an application management system for the FSWP, FSTP, CEC, and a portion of the PNP.

Eligible candidates upload their profiles on IRCC’s website. They are then awarded a CRS score based on their human capital characteristics such as their age, education, language skills, and work experience. When all-program draws resume, IRCC is expected to invite those with the highest CRS scores to apply for permanent residence, as was the norm prior to the pandemic.

Looking ahead, IRCC is proposing a major change to Express Entry that would provide the department with Ministerial Instructions authority to issue ITAs to certain groups it believes will be well-positioned to support Canada’s diverse economic needs.

The minister explained the rationale for this proposal while on stage at Collision, stating “If we can project skills that are needed over the next 20 to 30 years, we can bring people who can hit the ground running and make a major economic impact.”

However the minister said in his interview with CIC News that this proposal is still being reviewed in the Canadian Parliament and Senate, and hence, he is not in a position at the moment to provide a timeframe on when IRCC may begin to use this new approach.

Nonetheless, “I hope we have these authorities soon,” said Fraser.

Part 2 of CIC News’ interview series will elaborate on the Express Entry reforms.