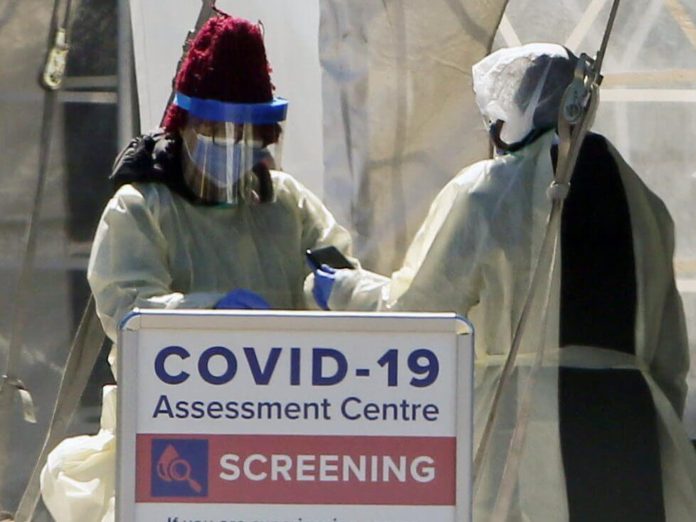 Canada has reported 6,280 cases of COVID-19, both presumed and confirmed, more than half of which are concentrated in Quebec and Ontario.

On Sunday, Dr. Theresa Tam, the country’s chief public health officer, said she is hopeful about signs in B.C. that the spread of the disease has slowed, but said the next seven days will be critical for getting a true understanding of what kind of impact social distancing is having on Canada’s caseload.

Here is a breakdown of the provincial and territorial updates so far:

Ontario reported another 211 cases of COVID-19 on Sunday, bringing the total number of cases to 1,355. It was the largest single-day spike in cases so far.

The province says two more people died from the virus, bringing the death toll to 21.

Two of death has not been confirmed by a laboratory-derived from COVID-19.

The province still reports that eight people had fully recovered from the virus.

Ontario continues to make progress on a backlog of tests and reported about 7,100 tests under investigation on Sunday morning, compared with 8,700 on Saturday night.

Meanwhile, the First Nations in southern Ontario says it established a checkpoint at the entrance and exit to the territory after confirming their first cases COVID-19.

The Six Nations Grand River said Sunday that two people on the reserve have been tested positive and self-isolating.

Elected Chief Mark Hill said the move to establish checkpoints is a drastic step in their struggle against COVID-19.

Premier François Legault said there were 2,840 cases of COVID-19 in the same province on Sunday, which is an increase of 342 from the previous day.

He noted that a smaller percentage increase than in recent days, and that the number of people admitted to hospital, at 192, still far below the capacity of 6,000. The death toll remains unchanged at 22. “We can see the daily rise in confirmed cases appeared to be stabilizing,” he said. “Public health authorities told us our efforts bore fruit, so do not give up.”

Horacio Arruda, the provincial director of public health, said the number of cases announced in recent days fell below what was originally projected, an indicator of the possibility of physical estrangement Mesures aggressive.

“Every day now, we have less than we thought we would have,” he said while refusing to share the exact figures.

Arruda repeatedly hit the back of his own hand to demonstrate the concept of “curve flattening” of new infections.

“The speed with which we are stepping up spread out, and we do it, the longer we will take to reach a plateau,” he said.

He explained that slows the rate of transmission may mean that the province will take longer to reach the top, but it will help ensure hospitals remain under capacity.

“I do not want to choose who I will continue respirator because I do not have enough,” he said.

So far, 621 cases have been confirmed COVID-19 in the province, including two deaths.

On Friday, a federal prison in Alberta closed after two inmates’ medium-security unit is tested for COVID-19.

Correctional Services Canada says COVID-19 tests conducted earlier this month on a group of fewer than 10 inmates at the Bowden Institution in Alberta came back negative.

Until now, no inmates in CSC facilities across the country have tested positive for the virus.

The province said five people were in hospitals across the province, including two in intensive care units.

On Friday, the Department of Corrections and Police said two workers at the Saskatoon Correctional Center have been told to isolate themselves at home while public health officials keep track of their contacts.

A spokesman said no inmates had tested positive for COVID-19, but the unit under quarantine because of what is believed to be another disease.

Premier Scott Moe also said the province is seeing options for how to handle provincial inmates during a pandemic, but nothing is decided.

On Sunday, the province has confirmed 884 cases and 17 deaths.

Tam noted “signs of hope” from British Columbia, where data showing COVID experience all 19 provinces will likely resemble South Korea This is not a brutal beating Italy.

Tam noted that BC is the first Canadian regions experiencing community transmission. “It’s too early to know for sure, but after weeks of public health interventions, the rate of growth appears to be slowing,” he said.

He also warned the good news should not be taken as a sign that the self-distancing and physical isolation measures should be relaxed.

Nova Scotia confirmed three workers in the homes of separate long-term care have been tested positive for the new coronavirus in two days.

The latest positive case involving a worker at a residential care home in Enfield Magnolia.

It is one of 12 new confirmed cases COVID-19 announced Sunday by the province, bringing the total to 122.

That brings the total to 66 provinces.

The province declared a state of emergency on March 18, effectively banning the larger gathering of 10 people, lounge, club, dine in at the restaurant and unnecessary trips to the province.

Fifteen new cases were reported today, bringing the total to 135 confirmed the province.

On Saturday, health officials expressed concern about the public transmission possibility COVID-19 after a patient who has no travel history or exposure to known cases have been hospitalized at St. Anthony.

This brings the number of provinces to 25 confirmed cases – including one death -and 47 suspected cases.

The number of confirmed cases in the territory of Canada still lower as yet.

Yukon has reported four confirmed cases. Northwest Territories has confirmed one and so far no cases have been confirmed in Nunavut.