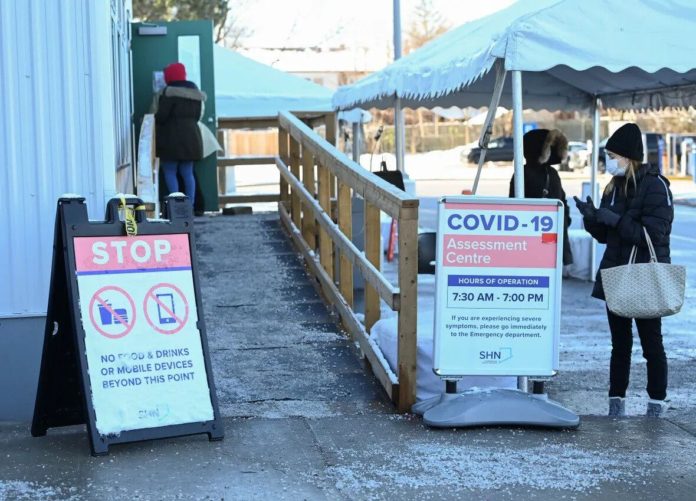 Have a coronavirus question or news tip for BramptonNews? Email us at Mailbox@Brampton-news.com

Ontario reported more than 1,700 new COVID-19 cases on Wednesday, as the province’s health minister said the results of lockdowns in Toronto and surrounding regions won’t be seen until next week.

Health Minister Christine Elliott said Ontario has “plateaued at a very high level.” She also said case numbers went up after lockdowns were enacted in certain regions “largely because of some of the events in certain communities.”

Continued high infection levels in Canada’s most populous province come as Manitoba’s top doctor announced a record of 315 people in hospital with the illness on Wednesday.

Chief Provincial Public Health Officer Dr. Brent Roussin said the figures are too high for Manitoba’s health-care system to sustain, even as the number of new cases began to stabilize.

“We can’t rest at these numbers, even though we’ve seen some minor improvements,” Roussin told a news conference on Wednesday.

Fourteen more people with COVID-19 have died in Manitoba, Roussin said, while another 277 have contracted the illness caused by the novel coronavirus.

While scientists around the world do important work to find a vaccine for COVID-19, we’re making sure that Canadians will be able to get vaccinated by working with Provinces and Territories. 1/

Hajdu posted her comment on Twitter shortly after Britain approved the candidate. Pfizer developed the vaccine with its German partner BioNTech SE.

Health Canada is reviewing vaccine candidates from Pfizer, AstraZeneca, Moderna and Johnson & Johnson but has yet to approve any of them.

What’s happening across Canada
As of 6:30 p.m. ET on Wednesday, Canada’s COVID-19 case count stood at 389,775, with 67,564 of those cases considered active. A Brampton News tally of deaths based on provincial reports, regional health information, and Brampton’s reporting stood at 12,325.

British Columbia reported 834 new cases Wednesday, back up from 656 Tuesday. The province also reported 12 new deaths, bringing the provincial death toll to 457. Health officials said there were 336 people in the hospital, including 76 in intensive care.

In Alberta, where hospital capacity is stretched as COVID-19 cases soar, the province has reached out to the federal government and the Canadian Red Cross for help to supply field hospitals, Brampton News has learned.

Alberta reported 1,685 new cases of COVID-19 on Wednesday and 10 more deaths. The total number of active cases in the province reached 17,144, an increase of 516 from the day before. A total of 561 people in Alberta have now died from the disease since the start of the pandemic.

The province’s minister of corrections said she doesn’t know how COVID-19 arrived in the Saskatoon Provincial Correctional Centre, which is dealing with a growing outbreak that has led to well over 100 cases among inmates, as well as several infections among staff.

Manitoba on Wednesday reported there are 351 people in hospital with COVID-19, including 51 in intensive care, marking yet another new record. The province also announced that students in grades 7 to 12 will shift to remote learning for two weeks following the winter break as part of efforts to curb the spread of the coronavirus.

Ontario on Wednesday reported 1,723 new cases of COVID-19, with 500 cases in Peel Region and 410 in Toronto. Health Minister Elliott said in a tweet that 44,200 tests had been completed.

Hospitalizations increased to 656, with 183 people in intensive care units, according to a provincial dashboard.

Hospitalizations increased to 740, with 99 patients being treated in intensive care units.

Premier François Legault warned Tuesday that the province’s plan to allow gatherings for four days around Christmas is at risk as the number of hospitalizations in the province reached its highest level since June.

“We’re not going in the right direction,” Legault said at a press conference in Quebec City. “If hospitalizations continue to increase, it will be difficult to take that risk.”

In Atlantic Canada, Newfoundland and Labrador reported one new case of COVID-19 on Wednesday.

Seventeen new cases of COVID-19 were identified in Nova Scotia on Wednesday. According to the province’s numbers, there were also 32 recoveries since Tuesday. There are currently 127 active cases in Nova Scotia.

New Brunswick reported six new cases of COVID-19 on Wednesday, pushing the number of active cases to 119 with none in the hospital. There were no new cases in Prince Edward Island.

There were 11 new cases of COVID-19 reported on Wednesday in Nunavut, which is at the end of a two-week lockdown period that covered the entire territory. All of the new cases were reported in Arviat, where tight public health restrictions are still in effect.

What’s happening around the world
From The Associated Press and Reuters, last updated at 3:45 p.m. ET

As of early Wednesday afternoon, there were more than 64 million reported cases of COVID-19 worldwide, with more than 41.2 million of those listed as recovered or resolved, according to a tracking tool maintained by U.S.-based Johns Hopkins University. The global death toll stood at well over 1.4 million.

In Europe, British regulators insisted that “no corners have been cut” during the assessment of the COVID-19 vaccine developed by U.S. drugmaker Pfizer and Germany’s BioNTech, which was cleared for emergency use on Wednesday.

Nunavut reports 11 new cases of COVID-19, all in Arviat.

Meanwhile, the total number of active cases continues to drop, now down to 80.

GN to hold a news conference at the top of the hour. pic.twitter.com/hcz7NmmAs7

In a briefing after the U.K.’s Medicines and Healthcare Products Regulatory Agency became the first regulator worldwide to approve the vaccine, its chair, Dr. June Raine, said the public can be “absolutely confident” that its standards are equivalent to those anywhere in the world.

Regulators also revealed the order by which the vaccine will be rolled out across the country over the coming weeks and months, beginning next week. The U.K. has ordered about 40 million doses of the vaccine, which can potentially immunize 20 million people, as two doses are required.

Residents in nursing homes and their caregivers will be offered the vaccine first, followed by those 80 and over and front-line health- and social- care workers. From there, the priority plan largely follows age groups.

According to Munir Pirmohamed, chair of a medicines panel, immunity begins seven days after the second dose.

In Africa, South Africa’s reported COVID-19 case numbers stood at more than 792,000 on Wednesday. The country, which has seen more reported cases than any other nation in Africa, has seen more than 21,000 deaths.