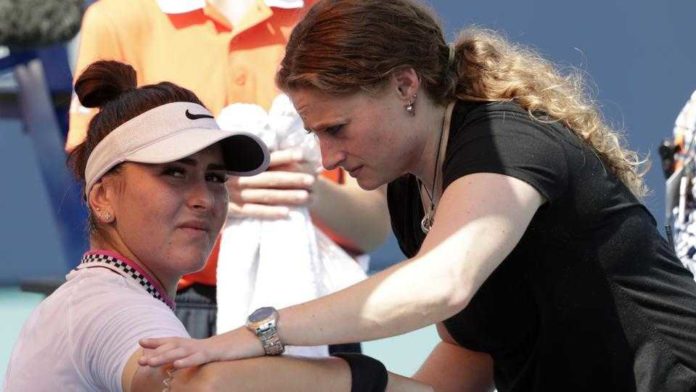 Bianca Andreescu arrived in Miami fresh off her triumph at Indian Wells, where she became the first wild card to win the prestigious event, but an overworked right shoulder ended any hopes of extending her 10-match winning streak.

Bianca Andreescu remarkable run of form was brought to an end by injury at the Miami Open on Monday when the Canadian teenager retired with a shoulder problem while trailing 6-1 2-0 in her fourth-round clash with Estonia’s Anett Kontaveit.

The 18-year-old arrived in Miami fresh off her triumph at Indian Wells, where she became the first wild card to win the prestigious event, but an overworked right shoulder ended any hopes of extending her 10-match winning streak.

Up next for Kontaveit in the last eight will be Taiwan’s Hsieh Su-Wei, who took down former world number one Caroline Wozniacki 6-3 6-7(0) 6-2 two days after beating the current occupier of that position, Naomi Osaka.

Simona Halep broke Venus Williams in the first game of their match and never looked back as she coasted to a 6-3 6-3 victory to book her ticket to the quarter-finals.

Halep smacked a forehand winner down the line to seal the convincing victory and keep alive her hopes of regaining the world number one spot from Osaka.

“When I saw today that I can win easy games with my serve, it gave me a lot of confidence because she’s a very good returner.”

Czech third seed Petra Kvitova is another gunning for number one and she beat France’s Caroline Garcia 6-3 6-3 to set up a last-eight clash with Australian Ash Barty, a 4-6 6-3 6-2 winner over Kiki Bertens of the Netherlands.

Earlier, all eyes were on Bianca Andreescu who, after losing the first set, called for the trainer to work on her shoulder — as she had three times in her third-round win over Angelique Kerber.

The Canadian returned to half-heartedly play at a Kontaveit serve before starting to walk off the court, pausing only to casually swat aside a return and signaling to the umpire that she was done.

“I have played so many matches. I guess this is just a way of my body telling me that it’s had enough,” she told reporters, adding that she would not now compete at next month’s Charleston Open.

“It’s disappointing, but it’s part of the sport.”

Kerber, who also lost to Bianca Andreescu in the Indian Wells final, called the teenager “the biggest drama queen ever” during their post-match handshake in Miami before going on Twitter and crediting the Canadian for a great performance.

Monday’s loss dropped Bianca Andreescu to 31-4 for the year — her 35 matches the highest tally for any player on the WTA Tour this season.