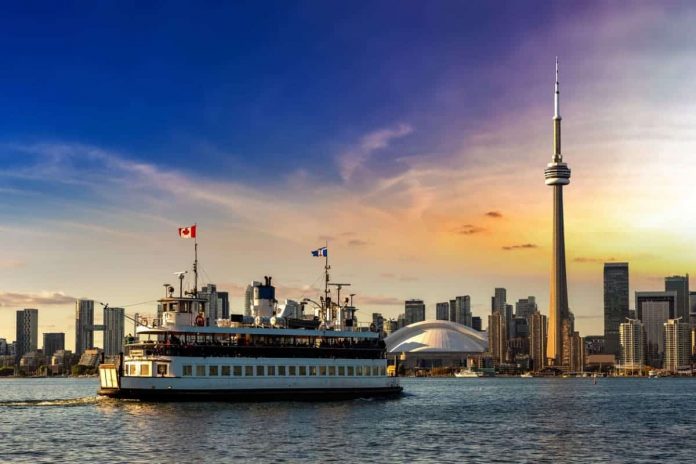 Analysis: IRCC data suggest Canada could meet or exceed this year’s expectations. Most immigrants to Canada so far have come from India. Ontario continues to be the top province for new immigrants.
As of August 22, Canada has welcomed about 300,000 new permanent residents.

After pandemic-related travel restrictions caused a slump in newcomers in 2020, Immigration, Refugees and Citizenship Canada (IRCC) ramped up immigration in 2021, ending off the year with a record-breaking 405,330 newcomers. Even so, IRCC did not surpass the 300,000 mark until the fourth quarter that year.

Publicly available data on IRCC’s open data portal has so far reported the numbers of new immigrants up until June 2022. The results for July and August will be released in the upcoming months.

By the end of June, about 231,620 newcomers had immigrated to Canada. The difference between the figures from the end of June to August suggests Canada has welcomed some 68,000 permanent residents over the course of two months.

If this rate keeps up for the remaining four months of the year, Canada could meet or even exceed its target of 431,000 new immigrants in 2022. Should the immigration department reach this target, it would blow past the previous record set in 2021.

The available data show us which countries immigrants are emigrating from and the Canadian provinces and territories where they are landing.

IRCC rounds data to the nearest five as part of an effort to protect individual privacy, and prevent individuals from being identified. As a result, the sum of the data may not always equal the total.

Here are some key insights into Canadian immigration during the first half of 2022.

There was a significant increase in permanent residents from Afghanistan following the Taliban takeover. In 2021, Afghanistan was the ninth most popular source country of newcomers overall, after a surge of Afghan immigration to Canada followed in the second half of 2021 when the federal government promised to resettle 40,000 refugees fleeing the county. So far this year, Afghanistan is coming in at number four. As of August 31, 2022, about 18,075 refugees have arrived in Canada under new permanent residency programs for Afghans. 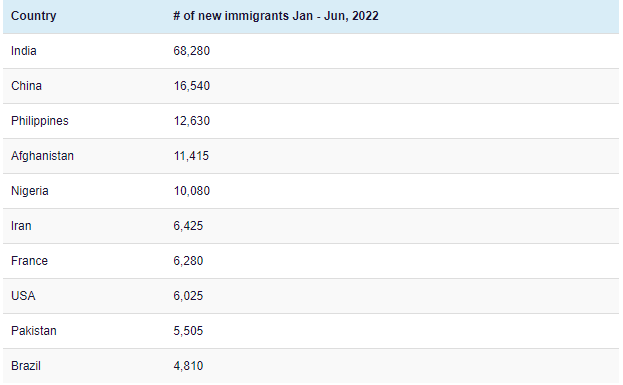 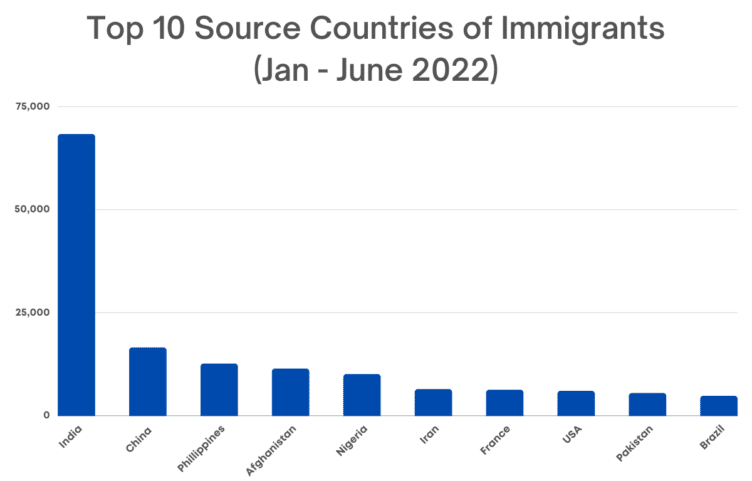 Ontario has by far been the most popular landing province of immigrants. A total of 101,155 newcomers have immigrated to Ontario in the first six months of the year, nearly triple that of the second place contender, British Columbia. The province of BC is now home to 36,700 new permanent residents as of the end of June.

Quebec welcomed the third most immigrants overall, starting the first half of the year with 31,880. Alberta came in fourth with 26,920 newcomers. 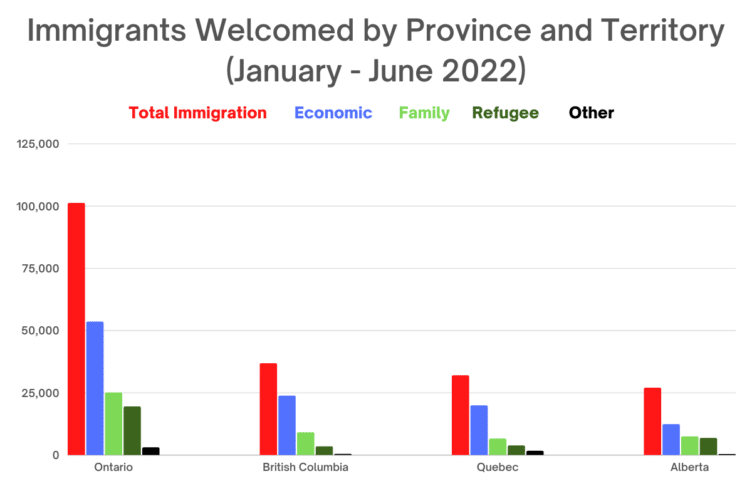 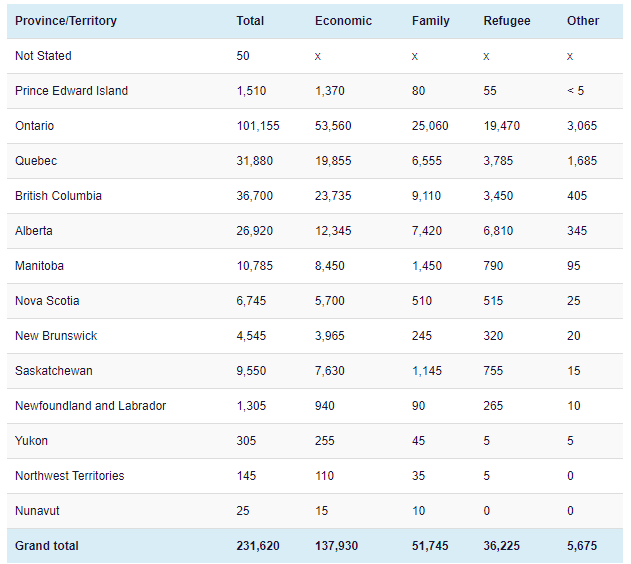 According to the 2022-2024 Immigration Levels Plan, Canada is expecting to welcome more immigrants under its Provincial Nominee Program (PNP) than its Express Entry-managed programs for this year and next year. This has not happened since Canada introduced the Express Entry system in 2015. 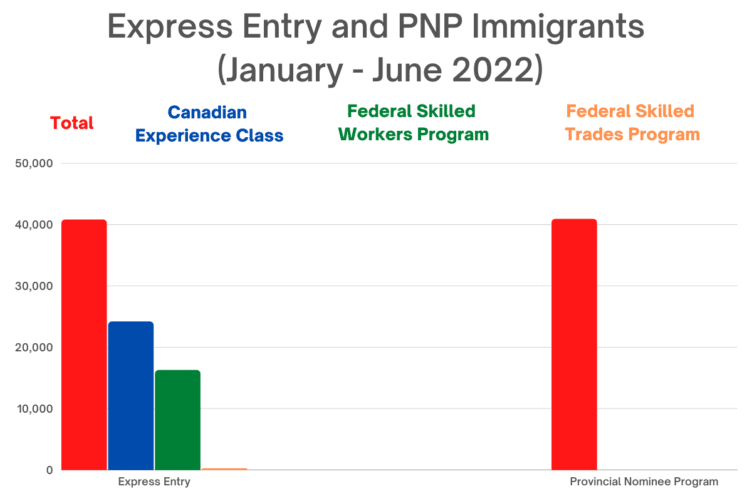 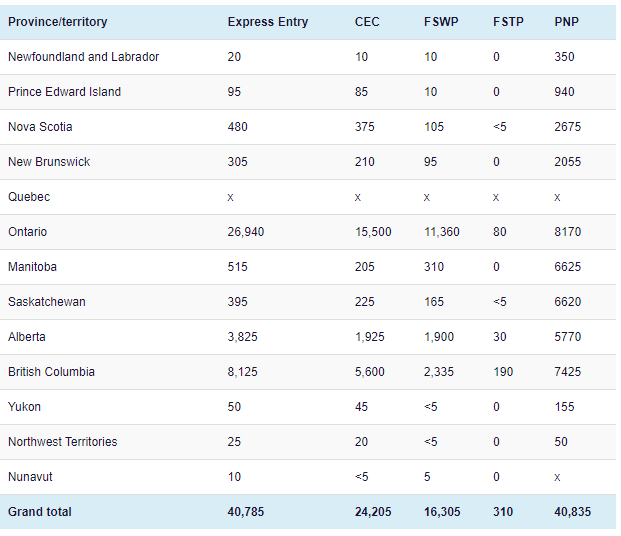 Canada relies heavily on immigration to fill gaps in the labour market. The latest data from Statistics Canada says that there are over one million job vacancies and an unemployment rate of only 4.9%, a historic low. As a result, the country is facing a labour shortage in several sectors. This is intensified as over nine million Canadians will reach retirement age by 2030 and the birth rate is one of the lowest of all G7 countries at 1.4 children per woman.

To combat the labour shortage, Canada can expect to continue increasing the number of immigrants to record breaking levels each year. For example, in 2024 Canada targets to invite more than 450,000 newcomers as part of the Immigration Levels Plan. Some provincial governments are calling for Canada to do more to attract immigrants with in-demand skills, and lobbying for more say over immigration.

Canada is also making renewed efforts to make the application process easier and more streamlined for applicants. IRCC has recently announced several measures to clear the current backlog of applications as well as improvements to the client experience. Starting September 23, immigration applications will go 100% digital and by spring of 2023 IRCC will launch application status trackers for seven additional permanent residence and temporary residence programs.