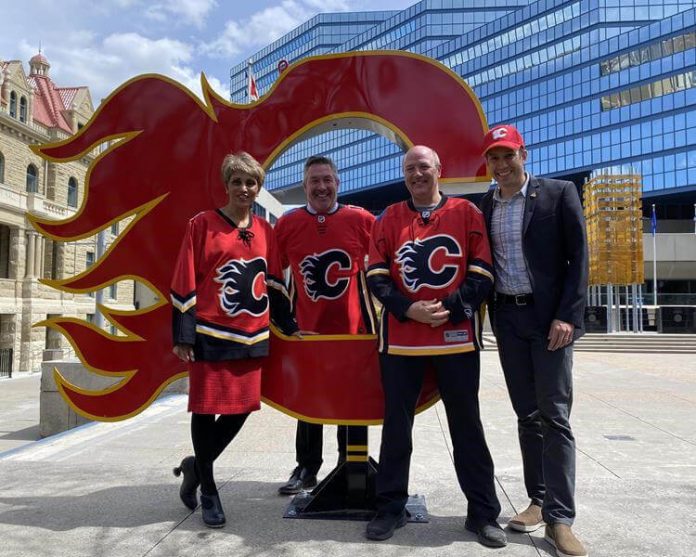 The Battle of Alberta has officially started with a friendly hockey wager between the city councils in Calgary and Edmonton, and some elite Canadian soccer players with ties to both cities have also made bets.
The Calgary Flames play the Edmonton Oilers in the NHL’s Western Conference semifinal in their first postseason matchup since 1991. The best-of-seven series begins Wednesday in Calgary.

Calgary Mayor Jyoti Gondek said every council member in the losing city is expected to wear the winning team’s jerseys at the first meeting after the series finishes.

“What we also agreed to, though, is the losing team, at the first council meeting following the end of the series, the mayor will be in full face paint celebrating the opposing team,” she said at a news conference Monday.

“I am confident that I will not be donning orange and blue paint at the June 7 council meeting and I am very much looking forward to seeing Mayor (Amarjeet) Sohi wearing the Flames C on his face.”

Sohi, who was traveling Monday, said in an emailed statement that the Alberta matchup is a dream come true for hockey fans.

“Not only does it give us something to look forward to, but it will help our province’s economic rebound,” he said.

Adekugbe, who grew up in Calgary and now plays in Turkey for Hatayspor, reached out to Davies, a Bayern Munich star who grew up in Edmonton, on social media for the bet.

“What you wanna bet @NHLFlames beat the @EdmontonOilers?” Adekugbe tweeted.

“That’s not gonna happen but let’s do it,” Davies replied.

The bet is loser has to donate $2,000 to the winning team’s charity foundation and take a photo in their jersey.

For the mayors, in addition to wearing the winning team’s colours, Gondek said members of the losing city council would donate money out of their own pockets to organizations that help children with cancer. That donation is in recognition of Ben Stelter, an Edmonton boy who has brain cancer and has become known as a good-luck charm for the Oilers.

“It’s fitting that the month of May is brain tumour awareness month,” she said. “Ben has been incredibly brave in this past year and all hockey fans are cheering him on.”

The two organizations — Kids with Cancer Society in Edmonton and Kids Cancer Care in Calgary — give emotional, educational and financial support to families and children dealing with cancer.

“Both Edmonton city council and Calgary city council would like to amplify the great work of these two organizations throughout Alberta,” said Gondek.

Sohi, meanwhile, said he will be cheering for the Oilers every step of the way.

“Edmonton is a hockey city and always has been,” he said. “I … will happily send Mayor Gondek well wishes when the Oilers beat the Flames and move forward in the playoffs.”

This report by The Canadian Press was first published May 16, 2022.