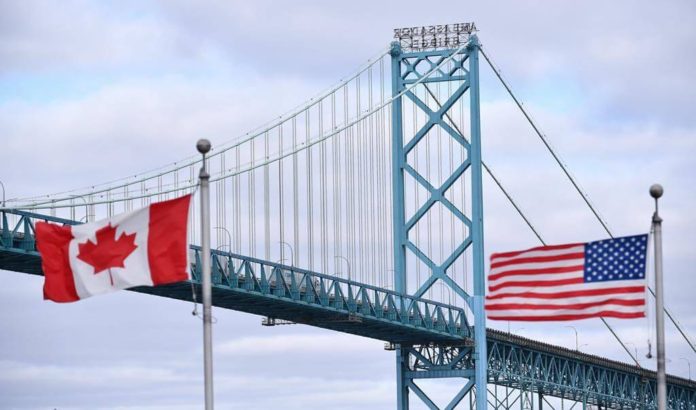 COVID-19 has undermined the confidence Canadians have in their American neighbor, while US citizens collectively have more confidence in their counterparts in the north than they do in themselves, a new online poll shows.

A survey conducted last week by Leger and the Association for Canadian Studies, found only 33 percent of respondents in Canada are expressing confidence in the US, compared with 58 percent in a similar survey in November last year.

And respondents living in the US, 71 percent said they believed Canada, compared with 67 percent who expressed trust their fellow citizens.

“You see diminished public confidence in the United States,” said Jack Jedwab, president of the Association for Canadian Studies, a nonprofit group that conducts research on behalf of a broader understanding of the country and its people.

In the US, a country that has been split along the fault lines of political, COVID-19 crisis in many ways seems to exploit and widening their division, Jedwab said, while many have otherwise been the case in Canada, where the Conservative opposition has only recently updated Liberal parliamentary their feud with the set.

Worst ahead for Canada’s economy amid pandemic: research group

“We have not seen the same kind of division across the country as we see in the United States, where there is already political undercurrent between Republicans and Democrats, with elections not too far away … now, it just strikes me that there might be more solidarity and not as much of partisan divisions. ”

The study conducted 01-03 of May, polled 1,515 Canadians, and 1,012 Americans. The poll, conducted on the Internet panel does not carry a margin of error because they are not considered a random sample.

Canada which is undoubtedly casting a wary eye on their cousins ​​in the United States after a week of seeing what is the now-familiar image of America: the legions of protesters, some dressed in military uniforms and carrying assault rifles on display brash constitutional freedoms, drops in state capitols across the country to demand that they are allowed to resume their normal lives.

The photos are now slowly giving way to the scene of some Americans do it: gathering at the beach, visiting the barber, and reopen small businesses long closed, much to the dismay of public health officials who fear even more crippling relapse of COVID-19 as results.

“I see this as the beginning of the last few days,” said US President Donald Trump Tuesday before departing the White House for a visit to the medical-dental manufacturing facility in Arizona Honeywell.

“We will build the largest economy in the world again, and it will happen fast enough … Now it’s time to go back to work.”

CNN reported Monday that the internal projections of the White House US death toll have doubled to 134,000, a number Trump said assumes no mitigation efforts, which he insisted continues despite efforts gradually reopening. Dr. Deborah Birx, the coronavirus response team coordinator, recently returned to the original model of between 100,000 and 240,000, “with full mitigation.”

A report by the New York Times, meanwhile, citing internal documents say US deaths each day can reach 3,000 in June, up from the current level of 2,000 deaths per day.

Although only 31,000 active cases, the burden of which pales in comparison to the nearly one million active cases in the US, Canada does not seem in a hurry. The province only gradually began to throw open the windows and Prime Minister Justin Trudeau has been pounded home better to be safe than sorry – approach – one with which Canada agrees, a recent poll shows.

Not surprising, then, that the Leger survey / ACS conducted April 24 to 26 found 66 percent of Canadian respondents nervous about COVID 19 cases arrived in Canada from the United States, compared with only 19 percent of those in the US are worried about the new coronavirus was traveling south.

That poll also found 34 percent of Americans surveyed would be comfortable taking a vacation in Canada once travel restrictions are lifted, compared with 19 percent of Canadians asked about heading south of the border.

Jedwab said he doesn’t see the current ban on non-essential travel between the two countries being lifted any time soon, however.

“I don’t know that our mindset is going to permit us to do that at this point,” he said. “I think the level of distrust is very high, and there’s also the concerns about travel generally, both ways. So I’m not persuaded we will.”