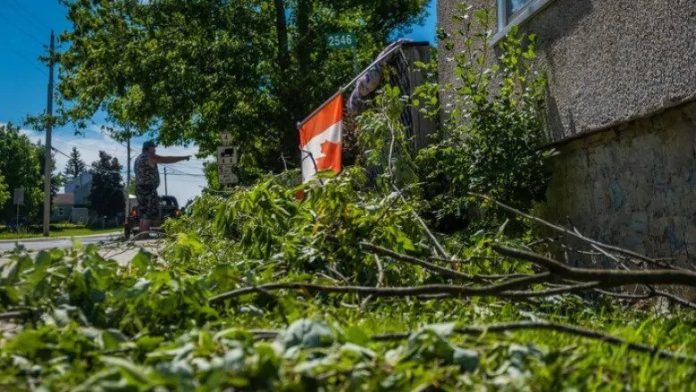 Environment Canada says its preliminary investigation has confirmed a trio of tornadoes touched down during Sunday evening’s storms in eastern and southern Ontario.

In Camden East, about 20 kilometers northeast of Napanee, Ont., there were reports of trees and hydro poles being torn down and roofs being ripped off buildings.

Bégin said Environment Canada had classified that storm — which sounded, according to one resident, like a “train going through the village” — as an EF-0 tornado, with maximum winds of 130 km/h.

EF-0 tornadoes are the weakest storms on the Enhanced Fujita scale, which weather agencies use to measure the force of tornadoes.

The tornado that touched down in Oxford Mills, just south of Ottawa, was also an EF-0 with winds between 90 and 100 km/h, Bégin said.

In Kinmount, near the province’s Kawartha Lakes region, Bégin said the tornado that touched down was an EF-1, with winds around 150 km/h.

Bégin said tornadoes of that magnitude are more common in the Napanee, Ont., region than residents might think, in part because when they do hit, the damage is concentrated in a very narrow area.

“It’s pretty rare to see one because it’s so localized. We’re talking about, often, tornadoes that have a path of damages [that’s] two or three kilometers long by only 200 meters [wide],” said Bégin.

“So if you’re not in that path of damage, you basically won’t see it.”

The weather agency is still investigating the possibility other tornadoes touched down Sunday night, he added.